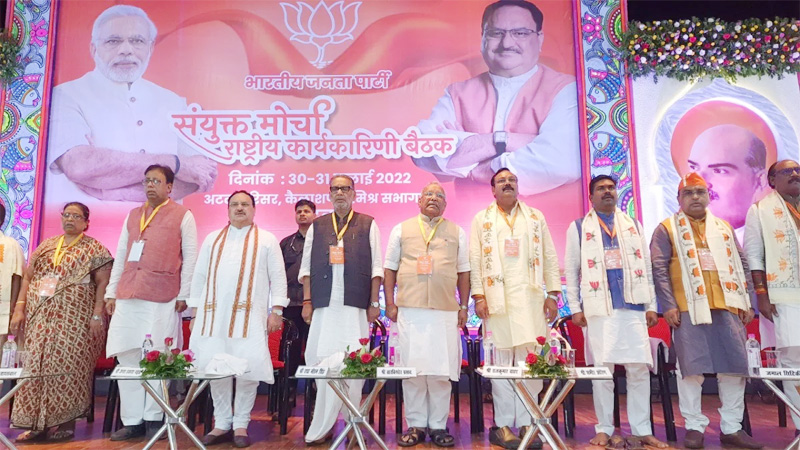 The Bihar BJP accorded a rousing welcome to Shri Nadda by erecting welcome arches decorated with flowers on the airport premises, while thousands of party Karyakartas gathered on the road sides, waving party flags and beating drums. From the airport, Shri JP Nadda went to Patna High Court where he garlanded the statue of Dr. BR Ambedkar. Another section of the Karyakartas also organised a motorcycle rally upto Jay Prakash Narayan’s statue near Gandhi Maidan to welcome Shri Nadda. Later in the day, the BJP National President inaugurated the Gram Sansad meant to deliberate on central and state government schemes and their implementation.

Shri Jagat Prakash Nadda said that over 2.63 lakh Panchayat profiles have been uploaded on a single portal. He said this while inaugurating “Gram Sansad” program on 30 July, 2022 in Patna, Bihar.

Addressing the Bihar Gram Sansad Chapter-II program Shri Nadda said, “Over 2.63 lakh Panchayat profiles have been uploaded on the portal. And a whopping Rs 5.9 thousand crores has been allocated to the Rashtriya Gram Swaraj Abhiyan.”
He further said, “In order to revamp our Panchayats, a single interface has been created. All the development programmes meant specifically for Panchayats have been consolidated on a single portal. So that our Rural Development Minister can monitor progress on a computer screen sitting in one place.”

During the program, the BJP National President said, “The idea of ‘Gram Swaraj’ was laid by Mahatma Gandhi. The leaders of Bharatiya Jana Sangh and BJP have done the work to give it a shape by implementing it on the ideological background”.
Hitting at the Opposition, BJP National President said the Congress has failed in recognising the vision of ‘Gram Swaraj’. But their thinking about recognizing the conscience of the farmer, village, and poor was left behind. And they failed to realize the vision of Gram Swaraj”.

He further lauded the work done under the leadership of Prime Minister Shri Narendra Modi and highlighted the development works of the government. He said Prime Minister Shri Modi has done the work of constructing 11 crore toilets across the country. Under the Ujjwala scheme gas connections have been given to women. Here 10,000 km long roads have been built under the Pradhan Mantri Gram Sadak Yojana. Today, a network of roads is being laid all over the country,” he added.

Shri JP Nadda on 31 July inaugurated 16 BJP district offices in Patna. While addressing on the occasion Shri Nadda said, “215 offices of BJP have been completed across the country; construction work is going on at 512 offices. Today, 16 BJP offices have been inaugurated and the foundation stone of seven offices has been laid in Bihar”.

The BJP National President said the party does not refer to its offices as “BJP office”, but a ‘Karyalay’. “We never refer to it as a ‘BJP office.’ We call it a ‘karyalay.’ An office opens at 10 am, and closes by 5 pm. But a ‘Karyalay’ is a living embodiment of our ideology. It is never shut,” he said.

The National President of the Bharatiya Janata Party Shri JP Nadda on 31 July, 2022 also graced the launch ceremony of a book ‘Smriti Prashant Mera Jeevan Aviral Ganga’ based on the life of Sikkim Governor Ganga Prasad at the Bapu Auditorium, Gandhi Maidan in Patna.

Shri Nadda said, “Since my childhood, I have taken inspiration from his life and I still continue to do the same.” Talking about Ganga Prasad’s personality, Shri Nadda said, “During the time of Emergency, Ganga Babu had fed countless people with his own hands.”

IN 2024, BJP WILL AGAIN FORM GOVERNMENT AT THE CENTER: Amit Shah 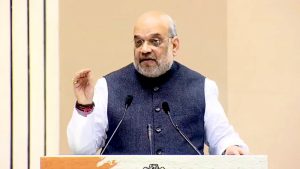 In his concluding address, Union Home Minister Shri Amit Shah said BJP is always ready for elections. BJP’s preparations for 2024 elections are complete. He said the Lok Sabha elections in 2024 and Bihar Vidhan Sabha elections in 2025 will be fought under the leadership of respected Prime Minister Shri Narendra Modi. By winning more Lok Sabha seats than before in 2024, the Bharatiya Janata Party will again form the government at the Center.

The Home Minister said for the first time Smt. Draupadi Murmu, a Tribal woman, coming from a very poor family became the President of the country and it’s a historic occasion for the country. For this, Shri Shah heartily congratulated Prime Minister Shri Narendra Modi. Shri Shah said the Modi government is committed for the welfare of villages, poor, farmers, Dalits, oppressed, tribals, women and backward etc. He further added now, the Center has the maximum number of Dalit, Adivasi, OBC and women ministers.