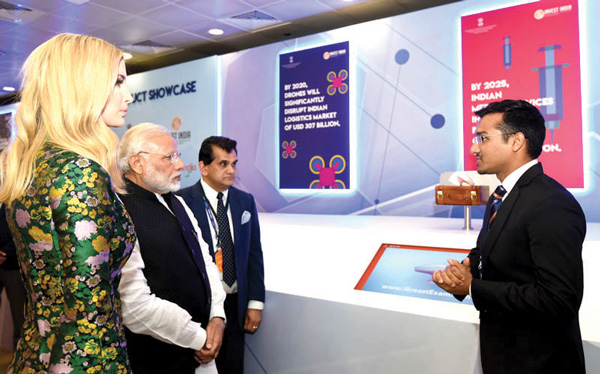 India hosted the 2017 Global Entrepreneurship Summit in partnership with the Government of the United States of America in Hyderabad. The Summit was held in South Asia for the first time. It brings together leading investors, entrepreneurs, academicians, think-tanks and other stakeholders to propel the global entrepreneurship ecosystem. PM Shri Narendra Modi inaugurated the summit on November 28, 2017.

Addressing the gathering PM Shri Modi said this event not only binds the Silicon Valley with Hyderabad but also show-cases the close ties between the United States of America and India. It under-lines our shared commitment towards encouraging entrepreneurship and innovation. The topics picked for this year’s summit include healthcare and life sciences; digital economy and financial technology; energy and infrastructure; and media and entertainment. These are all important issues, relevant to the well-being and prosperity of mankind.

He said the theme “Women First, Prosperity for All” makes this edition of GES stand out. In Indian mythology, woman is an incarnation of Shakti- the Goddess of power. We believe women empowerment is crucial to our development. Indian women continue to lead in different walks of life. More than sixty percent of workers in our agriculture and allied sectors are women. Our milk co-operatives in Gujarat and the Shri Mahila Griha Udyog Lijjat Papad, are examples of highly successful and globally acclaimed women-led co-operative movements. 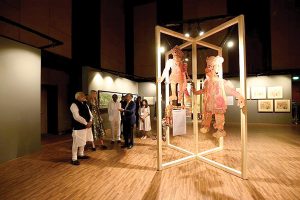 The number of Smartphone users in India’s projected to grow to over 500 million by 2018.
This offers immense potential for the growth of any entrepreneurial venture, in terms of outreach and job creation.
Our Start-Up India programme is a comprehensive action plan to foster entrepreneurship and promote innovation.
Our government has taken several steps to improve the business environment. The jump in India’s ranking in the World Bank’s Ease of Doing Business Report, from 142 to 100, in three years, is a result of this.

My government has launched the “Atal Innovation Mission”. We are opening Tinkering Labs in more than 900 schools to promote a culture of innovation and entrepreneurship among children.

Our “Mentor India” initiative engages leaders to guide and mentor students through these tinkering labs. In addition,19 incubation centers have been created in various universities and research institutions. These will nurture innovative start-up businesses to become scalable and sustainable.

We have created Aadhaar – the world’s largest biometric based digital database. This currently covers over 1.15billion people and digitally authenticates over 40 million transactions daily. We now digitally provide monetary benefits of various government schemes to the beneficiaries through Direct Benefit Transfer using Aadhaar.

Almost 300 million bank accounts with deposits of over 685 billion rupees have been opened through the Jan Dhan Yojana. These bring previously un-banked sections of societyinto the formal financial system. Of these, 53 per cent accounts are of women.

Having almost completed our programme to connect all villages with electricity, we have launched the Saubhagya scheme. This will provide electricity connections to all families by December 2018.

We have launched a programme to provide high-speed broad-band internet to all rural areas by March 2019.
Our Swachh Bharat Mission to improve sanitation and cleanliness, and the rural and urban housing missions under-line our commitment towards dignity of life.

Our infrastructure and connectivity programmes like Sagarmala and Bharatmala offer entrepreneurs many business opportunities for investment.

India has improved from its rank from 54 in 2014 to 35 in 2016 on the World Bank’s Logistics Performance Index.
Our foreign reserves have crossed 400 billion dollars, and we continue to attract large foreign capital flows.

To my young entrepreneur friends from India, I would like to say: each of you has something valuable to contribute towards creating a New India by 2022. You are vehicles of change and instruments of India’s transformation.

India has a true friend in the White House,
as President Trump: Ivanka Trump 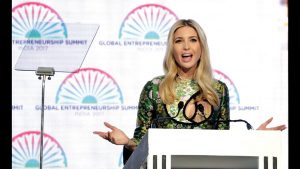 Ivanka Trump, daughter and adviser to US President Donald Trump, in her address at the Global Entrepreneurship Summit (GES) 2017, said India has a true friend in the White House, as President Trump had said earlier this year.
Highlights of Ivanka Trump’s speech

Thank You PM Modi for making India a symbol of democracy and beacon of hope for the world.
Transformational change has been proved by you, from selling tea in your childhood to becoming PM of India.
India has a true friend in the White House, as President Trump had said earlier this year
Hyderabad is quickly emerging as the innovation hub of India.

This summit is a symbol of growing economic and security cooperation between India and US.
For the first time ever, women make up 50 per cent of the people selected for this summit
Today, more than 11 million women in the US own businesses.

Women still face steep obstacles in starting, growing and establishing their businesses.
We are committed to supporting women and men both inside and outside of their homes. Women are more likely than men to hire other women. 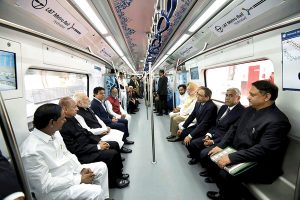 Prime Minister Shri Narendra Modi along with Telangana Chief Minister K. Chandrashekar Rao and other leaders inaugurated the Hyderabad Metro Rail on 28 November, 2017. The service, connecting Nagole station to the Miyapur station in the Hi-Tech City area — a stretch of 30 km, which was the longest stretch in an Indian metro project opened for common public.
The inauguration was held at Miyapur metro station. PM Shri Modi along with Shri Rao flagged off the metro rail and took a short ride on the train. The first phase of the metro will cover a total distance of around 72km across three corridors.