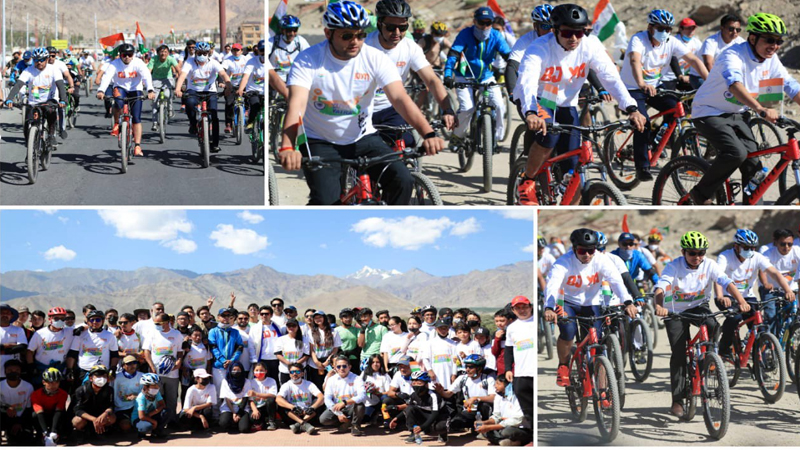 The Bharatiya Janata Yuva Morcha (BJYM) marked the 75th Year of India’s Independence with the “Yuva Sankalp Yatra”, a unique campaign wherein it organised 75 km of cycle rallies and marathons. This was held in 75 locations across the country from August 15-August 17 2021.

He added further that BJYM chose Ladakh as the culmination destination because it represents the spirit of New India. Since Independence there has been a call to make Ladakh, a Union Territory in order to protect its culture, languages and art. However, there had not been any government in the history of India and no Prime Minister, who showed the political will to make Ladakh the union territory. It was only in 2019 that our Honourable Prime Minister Shri. Narendra Modiji who not only removed article 370 but also gave Ladakh the status of Union Territory. I sincerely believe that Ladakh truly represents & symbolizes the New India Spirit of courage & conviction.

Under the leadership of BJYM President Tejasvi Surya, large number of its members took pledge on the holy banks of river Sindhu to build a strong, resilient and prosperous India that will be the leader of the world in 2047. While taking the pledge Sri Tejasvi Surya highlighted the importance of Sindhu River in India’s history & how our country has derived name “India” was originally derived from the name of the river Sindhu (Indus River).

The Yuva Sankalp Yatra is part of the country’s Azadi Ka Amrit Mahotsav. The Azadi Ka Amrit Mahotsav is a people’s Mahotsav initiated by the Hon’ble Prime Minister Shri Narendra Modi. The Yuva Morcha strives to ensure maximum participation from the youth by conducting various programmes throughout the year. One of the first set of events being organised was the Yuva Sankalp Yatra and Rashtragaan Samarpan programme.

The Yuva Sankalp Yatra was organized to promote the message of New India and Honourable Prime Minister Shri Narendra Modiji’s vision of India for 2047 and the role of youth. The cycling and running programmes were intended to encourage all the young people of the country to be fitter and stronger to create a healthy and resilient nation.