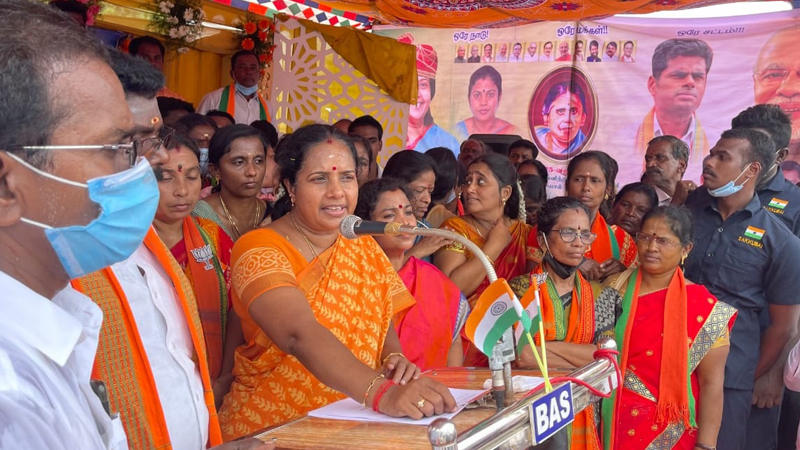 Anjalaiammal was born in 1890 and studied till 5th standard. When Gandhiji started the non-cooperation movement against the British rule, Anjalaiammal got involved in it. This was her first step in public life.

Anjalaiammal took an active part in the struggle to remove the statue of a British officer responsible for the massacre of India’s First War of Independence of 1857, and thus was imprisoned for participating in that struggle along with his 9-year-old daughter Ammakannu.  .

Anjalaiammal also joined the freedom struggle in 1932 and was arrested.  She was pregnant with her son when she entered Vellore Jail.  Despite her pregnancy, she was not afraid of facing prison life.  She had to take a month’s parole from the British for the delivery of her son.  But within 2 weeks of the birth of her son, Anjaliammal was back in jail with her newborn child.  Such was her determination regarding the freedom struggle of India.

When the British prevented the general public from meeting Gandhi, Anjalaiammal went to meet him in a burqa.  As a result, Gandhi called her the Jhansi Rani of the South.

Anjaliammal was so popular among the local population of Cuddalore that she was elected to the Legislative Assembly thrice after India’s independence. Her biggest contribution to the people of her constituency was to solve the drinking water problem of Teerthapalayam.

To put an end to the problem, Anjalaiammal worked on the project of building a branch canal from Veeranam Canal to Teerthaampalayam.  Today that canal is called Anjalai Canal.