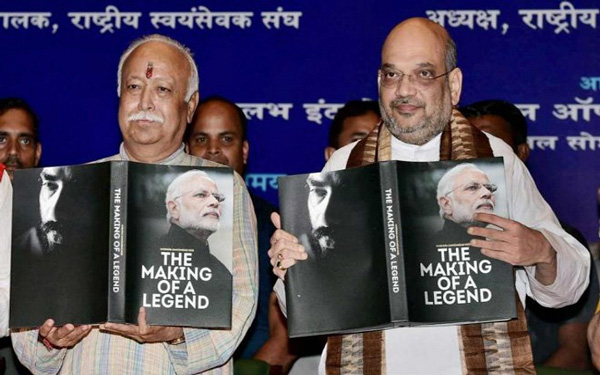 ‘The Making of a Legend’ released

Shri Shah was speaking at the launch of a book, ‘The Making of a Legend’, on Prime Minister Shri Narendra Modi on 13 July, 2017 in New Delhi. The function was also attended by RSS Sarsanghchalak Shri Mohan Bhagwat and several Union ministers and BJP leaders.

BJP National President said a country with a population of 125 crore cannot deal with the problem of unemployment by only creating jobs and the Modi government has provided self-employment to 7.28 crore youths.

Highlighting Modi Government’s schemes aimed at the poor strata of society, a segment he has been assiduously cultivating, Shri Shah said that the government’s biggest success was that it had provided opportunities to “the last man in the queue” to lift himself out of poverty.

The government ensured that every household had a bank account and had built over 4.38 crore toilets to give dignity to poor women who were otherwise forced to defecate in open, he said.

Taking a swipe at previous governments, Shri Shah said many Prime Ministers who spoke about development and the poor had come and gone but it was left to PM Shri Modi to build toilets, open bank accounts and provide the poor other basic facilities. The book has been authored by Bindeshwar Pathak, the founder of Sulabh International.