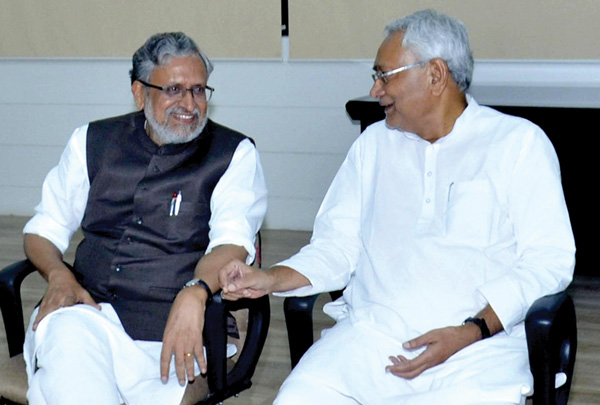 Shri Nitish Kumar sworn-in as the Chief Minister of Bihar for the sixth time on 27 July, 2017 a day after he resigned from the two-year-old Mahagatbandhan alliance government. By resigning himself from the government Shri Nitish Kumar ended weeks of speculation about the survival of the ‘grand alliance’ of the Congress, RJD and JD (U) after a fall out with the alliance partner RJD over severe corruption charges against Lalu Yadav and some of his family members, including son Tejashwi Yadav, who was the deputy CM in the previous dispensation.

On 26 July itself the NDA alliance submitted the list of MLAs to the Governor. These include 71 of JD(U), BJP 53, RLSP 2, LJP 2, HAM 1 and three Independents.

On 27 July, 2017 Governor Shri Keshari Nath Tripathi administered the oath of office and secrecy to Shri Nitish Kumar at Rajendra Mandapam in the Raj Bhawan, Patna. Senior BJP leader Shri Sushil Kumar Modi was also sworn-in. He will be the Deputy Chief Minister, a post he held in the previous NDA governments in the state.

As was widely expected, even the JD(U)-BJP combine won the crucial floor test in the Bihar Assembly on 28, July, 2017 with a convincing margin of 131 votes. The RJD-Congress combine got 108 votes. Noteworthy, the Nitish Kumar government needed 122 members’ support for a win in the 243-member House. In the Bihar Assembly, the RJD has 80 MLAs, the Congress 27 and the CPI-ML three, which adds up to 110. The Opposition got two short of that total.

Secularism should not be allowed to justify corruption, Shri Nitish Kumar said earlier in the House, attempting to justify his resignation as CM and his break from the ‘grand alliance’.

Whatever decision we have taken will be in the interest of Bihar and of its people. It will ensure development and justice. It will also ensure progress. This is a collective decision. I ensure that our commitment is towards the people of Bihar, Shri Kumar told reporters after the swearing-in.

After taking oath, Shri Sushil Modi said the development process will be back on track in the state with return of the NDA. The JD(U)-BJP alliance had earlier taken Bihar to new heights. At that point of time, the people of the state used to take pride in saying ‘I am a Bihari’. But in the last 20 months something went wrong. But now the JD(U)-BJP alliance will again take Bihar to newer heights, he said.