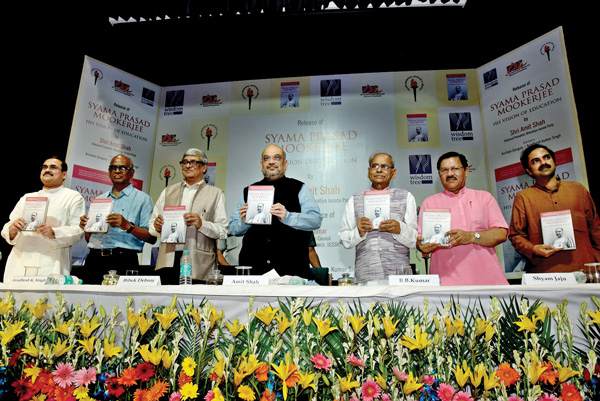 “A Bill was brought in the West Bengal Assembly in 1940. It was a proposal for Islamisation of Education. The Bengal Assembly did not pass it only because of his (Mookerjee)’s farsightedness,” Shri Shah said at the release of a book, “Syama Prasad Mookerjee: His Vision of Education”, edited by Dr. Anirban Ganguly and Shri Avadesh Kumar Singh in New Delhi on July 15, 2017.

“How many here are aware that West Bengal is in India because of Mookerjee?” he said. “If Jammu and Kashmir is our part today, the maximum contribution is of Mookerjee’s.’’ He added that Mookerjee’s “sacrifice ensured that we Indians do not need a permit to visit Kashmir”.

Shri Amit Shah attributed the BJP’s presence across the country to Mookerjee’s “farsightedness” that he formed BJS, the parent party of BJP.

“The Congress was the biggest party in 1950s. There was no possibility of any party coming to power soon. He formed a new party, despite knowing that it would not come to power in his lifetime,” Shri Amit Shah said. He added that Dr. Mookerjee knew that the country needed different policies.