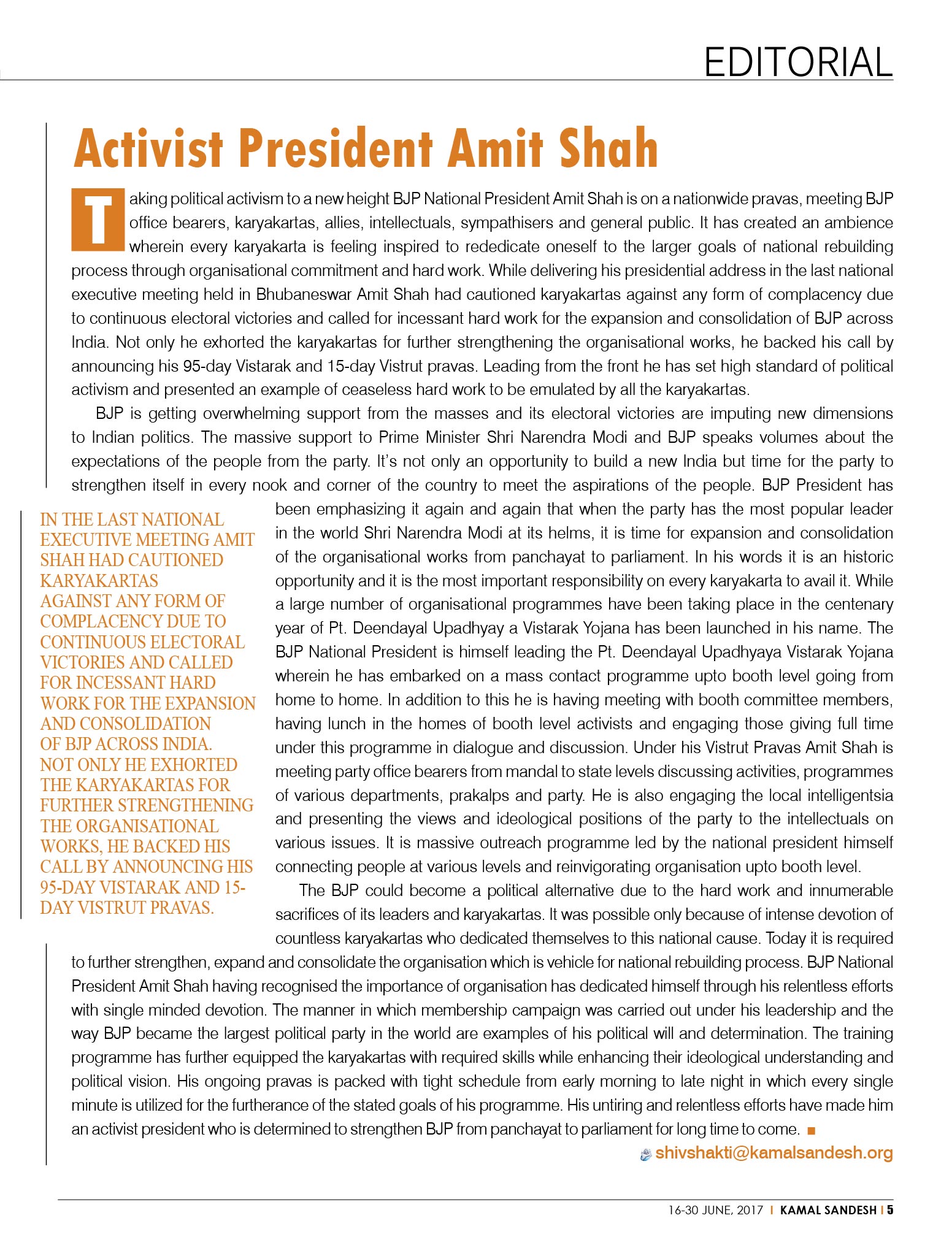 Taking political activism to a new height BJP National President Amit Shah is on a nationwide pravas, meeting BJP office bearers, karyakartas, allies, intellectuals, sympathisers and general public. It has created an ambience wherein every karyakarta is feeling inspired to rededicate oneself to the larger goals of national rebuilding process through organisational commitment and hard work. While delivering his presidential address in the last national executive meeting held in Bhubaneswar Amit Shah had cautioned karyakartas against any form of complacency due to continuous electoral victories and called for incessant hard work for the expansion and consolidation of BJP across India. Not only he exhorted the karyakartas for further strengthening the organisational works, he backed his call by announcing his 95-day Vistarak and 15-day Vistrut pravas. Leading from the front he has set high standard of political activism and presented an example of ceaseless hard work to be emulated by all the karyakartas.

BJP is getting overwhelming support from the masses and its electoral victories are imputing new dimensions to Indian politics. The massive support to Prime Minister Shri Narendra Modi and BJP speaks volumes about the expectations of the people from the party. It’s not only an opportunity to build a new India but time for the party to strengthen itself in every nook and corner of the country to meet the aspirations of the people. BJP President has been emphasizing it again and again that when the party has the most popular leader in the world Shri Narendra Modi at its helms, it is time for expansion and consolidation of the organisational works from panchayat to parliament. In his words it is an historic opportunity and it is the most important responsibility on every karyakarta to avail it. While a large number of organisational programmes have been taking place in the centenary year of Pt. Deendayal Upadhyay a Vistarak Yojana has been launched in his name. The BJP National President is himself leading the Pt. Deendayal Upadhyaya Vistarak Yojana wherein he has embarked on a mass contact programme upto booth level going from home to home. In addition to this he is having meeting with booth committee members, having lunch in the homes of booth level activists and engaging those giving full time under this programme in dialogue and discussion. Under his Vistrut Pravas Amit Shah is meeting party office bearers from mandal to state levels discussing activities, programmes of various departments, prakalps and party. He is also engaging the local intelligentsia and presenting the views and ideological positions of the party to the intellectuals on various issues. It is massive outreach programme led by the national president himself connecting people at various levels and reinvigorating organisation upto booth level.

The BJP could become a political alternative due to the hard work and innumerable sacrifices of its leaders and karyakartas. It was possible only because of intense devotion of countless karyakartas who dedicated themselves to this national cause. Today it is required to further strengthen, expand and consolidate the organisation which is vehicle for national rebuilding process. BJP National President Amit Shah having recognised the importance of organisation has dedicated himself through his relentless efforts with single minded devotion. The manner in which membership campaign was carried out under his leadership and the way BJP became the largest political party in the world are examples of his political will and determination. The training programme has further equipped the karyakartas with required skills while enhancing their ideological understanding and political vision. His ongoing pravas is packed with tight schedule from early morning to late night in which every single minute is utilized for the furtherance of the stated goals of his programme. His untiring and relentless efforts have made him an activist president who is determined to strengthen BJP from panchayat to parliament for long time to come.