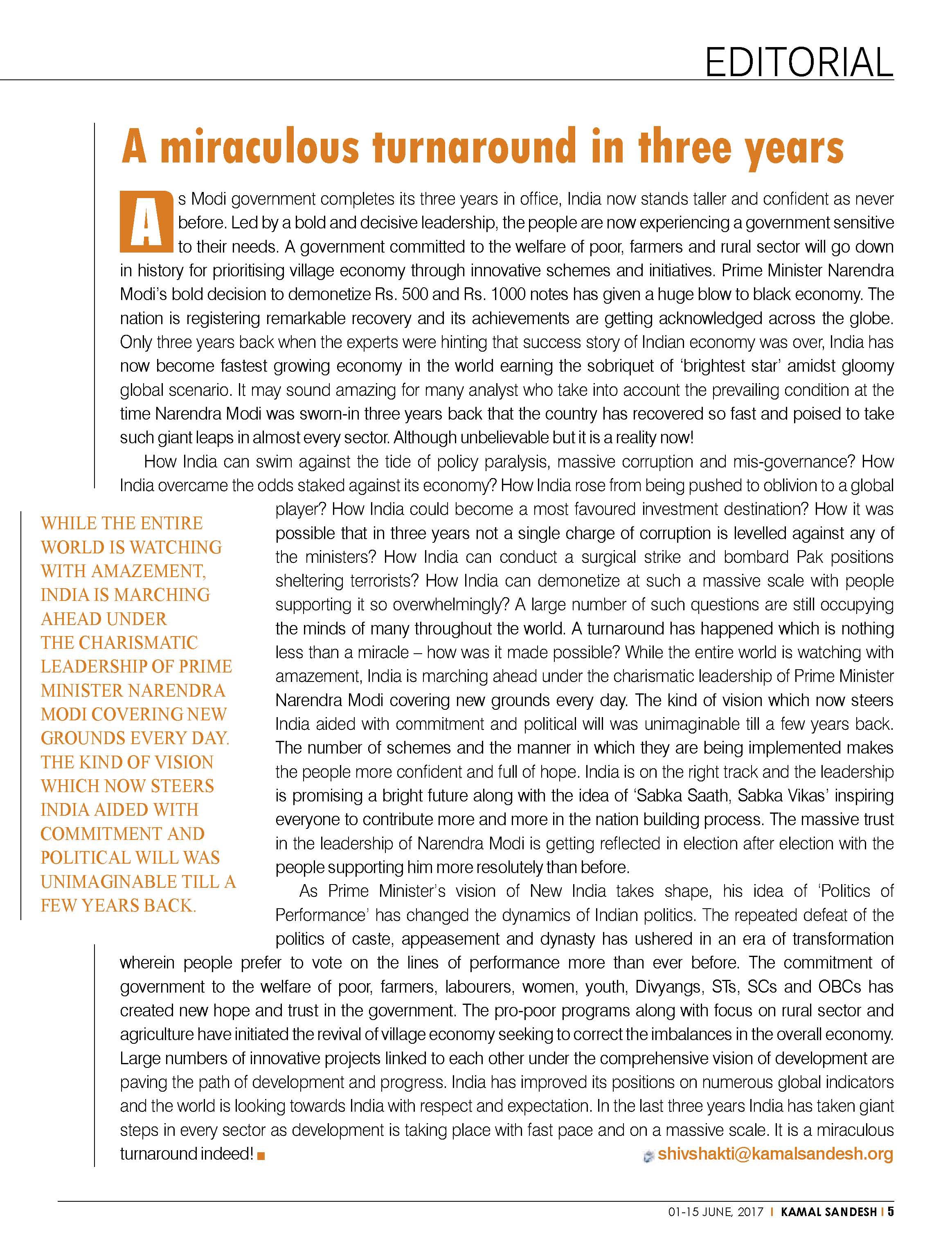 As Modi government completes its three years in office, India now stands taller and confident as never before. Led by a bold and decisive leadership, the people are now experiencing a government sensitive to their needs. A government committed to the welfare of poor, farmers and rural sector will go down in history for prioritising village economy through innovative schemes and initiatives. Prime Minister Narendra Modi’s bold decision to demonetize Rs. 500 and Rs. 1000 notes has given a huge blow to black economy. The nation is registering remarkable recovery and its achievements are getting acknowledged across the globe. Only three years back when the experts were hinting that success story of Indian economy was over, India has now become fastest growing economy in the world earning the sobriquet of ‘brightest star’ amidst gloomy global scenario. It may sound amazing for many analyst who take into account the prevailing condition at the time Narendra Modi was sworn-in three years back that the country has recovered so fast and poised to take such giant leaps in almost every sector. Although unbelievable but it is a reality now!

How India can swim against the tide of policy paralysis, massive corruption and mis-governance? How India overcame the odds staked against its economy? How India rose from being pushed to oblivion to a global player? How India could become a most favoured investment destination? How it was possible that in three years not a single charge of corruption is levelled against any of the ministers? How India can conduct a surgical strike and bombard Pak positions sheltering terrorists? How India can demonetize at such a massive scale with people supporting it so overwhelmingly? A large number of such questions are still occupying the minds of many throughout the world. A turnaround has happened which is nothing less than a miracle – how was it made possible? While the entire world is watching with amazement, India is marching ahead under the charismatic leadership of Prime Minister Narendra Modi covering new grounds every day. The kind of vision which now steers India aided with commitment and political will was unimaginable till a few years back. The number of schemes and the manner in which they are being implemented makes the people more confident and full of hope. India is on the right track and the leadership is promising a bright future along with the idea of ‘Sabka Saath, Sabka Vikas’ inspiring everyone to contribute more and more in the nation building process. The massive trust in the leadership of Narendra Modi is getting reflected in election after election with the people supporting him more resolutely than before.

As Prime Minister’s vision of New India takes shape, his idea of ‘Politics of Performance’ has changed the dynamics of Indian politics. The repeated defeat of the politics of caste, appeasement and dynasty has ushered in an era of transformation wherein people prefer to vote on the lines of performance more than ever before. The commitment of government to the welfare of poor, farmers, labourers, women, youth, Divyangs, STs, SCs and OBCs has created new hope and trust in the government. The pro-poor programs along with focus on rural sector and agriculture have initiated the revival of village economy seeking to correct the imbalances in the overall economy. Large numbers of innovative projects linked to each other under the comprehensive vision of development are paving the path of development and progress. India has improved its positions on numerous global indicators and the world is looking towards India with respect and expectation. In the last three years India has taken giant steps in every sector as development is taking place with fast pace and on a massive scale. It is a miraculous turnaround indeed!