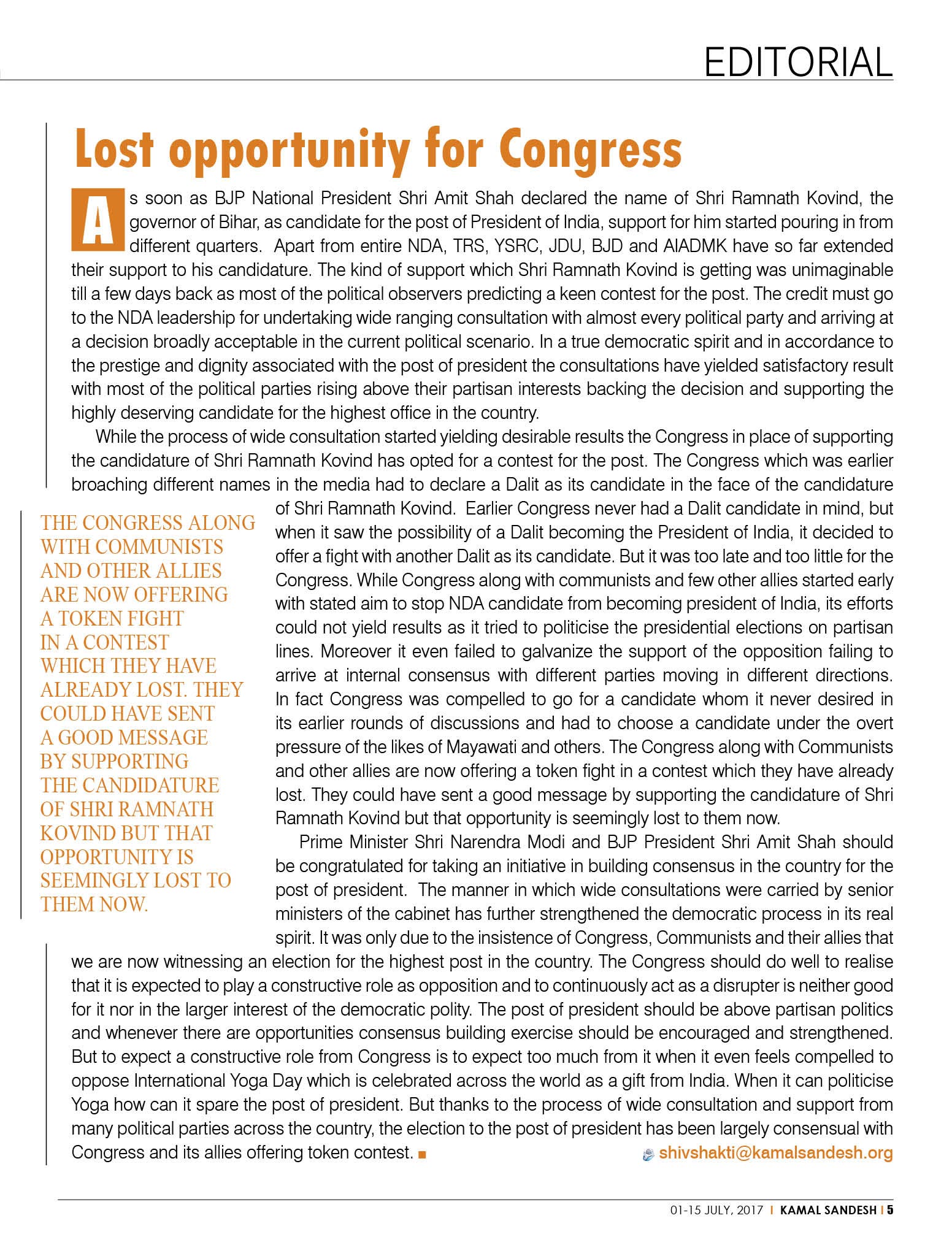 As soon as BJP National President Shri Amit Shah declared the name of Shri Ramnath Kovind, the governor of Bihar, as candidate for the post of President of India, support for him started pouring in from different quarters. Apart from entire NDA, TRS, YSRC, JDU, BJD and AIADMK have so far extended their support to his candidature. The kind of support which Shri Ramnath Kovind is getting was unimaginable till a few days back as most of the political observers predicting a keen contest for the post. The credit must go to the NDA leadership for undertaking wide ranging consultation with almost every political party and arriving at a decision broadly acceptable in the current political scenario. In a true democratic spirit and in accordance to the prestige and dignity associated with the post of president the consultations have yielded satisfactory result with most of the political parties rising above their partisan interests backing the decision and supporting the highly deserving candidate for the highest office in the country.

While the process of wide consultation started yielding desirable results the Congress in place of supporting the candidature of Shri Ramnath Kovind has opted for a contest for the post. The Congress which was earlier broaching different names in the media had to declare a Dalit as its candidate in the face of the candidature of Shri Ramnath Kovind. Earlier Congress never had a Dalit candidate in mind, but when it saw the possibility of a Dalit becoming the President of India, it decided to offer a fight with another Dalit as its candidate. But it was too late and too little for the Congress. While Congress along with communists and few other allies started early with stated aim to stop NDA candidate from becoming president of India, its efforts could not yield results as it tried to politicise the presidential elections on partisan lines. Moreover it even failed to galvanize the support of the opposition failing to arrive at internal consensus with different parties moving in different directions. In fact Congress was compelled to go for a candidate whom it never desired in its earlier rounds of discussions and had to choose a candidate under the overt pressure of the likes of Mayawati and others. The Congress along with Communists and other allies are now offering a token fight in a contest which they have already lost. They could have sent a good message by supporting the candidature of Shri Ramnath Kovind but that opportunity is seemingly lost to them now.

Prime Minister Shri Narendra Modi and BJP President Shri Amit Shah should be congratulated for taking an initiative in building consensus in the country for the post of president. The manner in which wide consultations were carried by senior ministers of the cabinet has further strengthened the democratic process in its real spirit. It was only due to the insistence of Congress, Communists and their allies that we are now witnessing an election for the highest post in the country. The Congress should do well to realise that it is expected to play a constructive role as opposition and to continuously act as a disrupter is neither good for it nor in the larger interest of the democratic polity. The post of president should be above partisan politics and whenever there are opportunities consensus building exercise should be encouraged and strengthened. But to expect a constructive role from Congress is to expect too much from it when it even feels compelled to oppose International Yoga Day which is celebrated across the world as a gift from India. When it can politicise Yoga how can it spare the post of president. But thanks to the process of wide consultation and support from many political parties across the country, the election to the post of president has been largely consensual with Congress and its allies offering token contest.