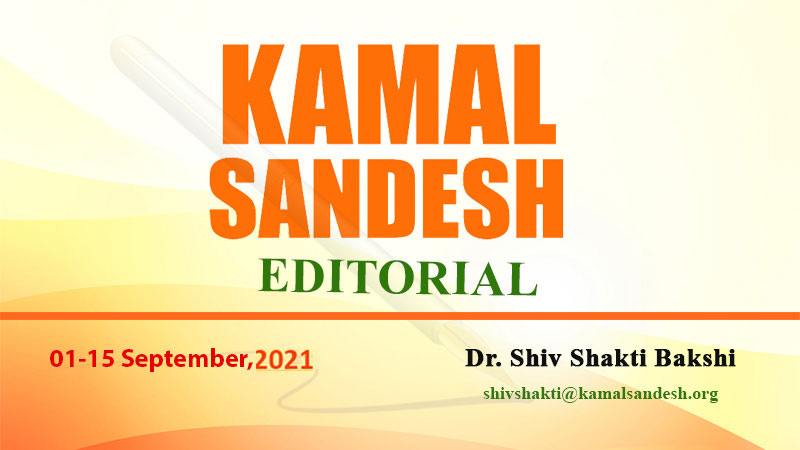 Addressing the nation on the 75th Independence Day, Prime Minister Shri Narendra Modi has laid down a roadmap for coming 25 years calling for everyone’s effort to build a strong, prosperous and vibrant India. While terming the coming 25 years as ‘Amrit Kaal’ for the nation, he said that this is the right time to embark on a journey of achievements on the basis of our own talent, resources and strength. He added the call of ‘Sabka Prayas’ to the mantra of ‘Sabka Saath, Sabka Vikas, Sabka Vishwas’, invoking the people to make their contribution in the journey of building an ‘Aatmnirbhar Bharat’ on the completion of hundred years of independence. The Prime Minister clearly laid down the path of ‘Amrit Kaal’ setting the goal of ascending new heights of prosperity, equipping the nation with modern infrastructure while bridging the rural-urban divide and reducing the unnecessary interference of government in the lives of people to the minimum. The rise of New India can undoubtedly be ensured with the participation of everyone and dedication and commitment of every Indian.

In the last seven years, India has recorded unprecedented growth in various sectors showing the resolve to build an ‘Aatmnirbhar Bharat’. It was the result of such resolve that India has been able to not only face the challenges of Covid-19 pandemic unitedly but also was successful in producing two vaccines which is an historic achievement for the country. As the Prime Minister in his address emphasised on ‘Gati Shakti’ in the days to come, he has rightly given a call for cent percent achievements in crucial sectors. The announcement of the National Master Plan of Prime Minister ‘Gati Shakti’ will not only lead the country towards holistic and integrated approach in infrastructure construction but it will also generate large-scale employment through the investment of more than 100 lakh crore rupees. While India can claim cent percent achievements in many sectors, making roads available to 100% villages, Bank accounts to 100% households, Ayushman cards to 100% families, gas connection to 100% eligible beneficiaries, pucca house for 100% beneficiaries and many more on cent percent basis are the new goals that nation has to achieve. A large number of innovative schemes are already transforming the lives across the nation ensuring delivery of welfare initiatives to the last man thereby empowering youth, women, poor, weak, deprived and oppressed people in the society.

While the nation is celebrating 75 weeks of ‘Aazadi ka Amrit Mahotsav’, Prime Minister Shri Narendra Modi started his address to the nation from the ramparts of Red Fort by paying respect to the memories of great freedom fighters of the country. In a significant move, the Modi government has also announced to henceforth commemorate August 14 as “Partition Horrors Remembrance Day” to remember one of the biggest tragedy of human history which resulted due to partition. As India moved ahead leaving behind the painful memory of partition, today after 75 years new avenues are opening up as the country prepares to avail the power of digital technology, renewable energy, blue economy, green hydrogen and many more areas full of new possibilities. Today, India has emerged as a confident nation which can take historic decisions like abrogation of Article 370, introduction of GST, enactment of CAA & Triple Talaq law, OROP for defence personnel, building of Shri Ram Temple, Surgical Strike and Air Strike and many more such determined actions. At the same time, under the dynamic and charismatic leadership of Prime Minister Shri Narendra Modi India is gifted with ‘Can Do’ generation capable of scripting an incredible saga of achievements and accomplishments. There is no doubt that ‘Amrit Kaal’ will take the nation to unimaginable heights.