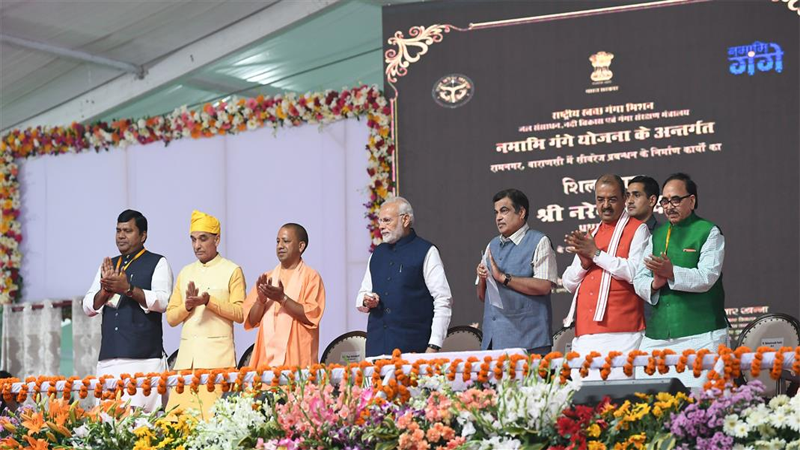 The Prime Minister Shri Narendra Modi, along with his cabinet colleague Shri Nitin Gadkari visited Varanasi on November 12 and dedicated the Multimodal Terminal on the River Ganga, to the nation, and received the first container cargo. He also inaugurated and laid the Foundation Stone for various other development projects in Varanasi.

The Prime Minister dedicated to the nation, two important national highways in Varanasi, having a total length of 34 kilometres and constructed at a cost of Rs 1571.95 crore. The 16.55 km Varanasi Ring Road Phase-I has been completed at a cost of Rs 759.36 crore, while the work of four-laning and construction of 17.25 km Babatput-Varanasi road on NH-56 has cost Rs 812.59 crore. The Babatpur Airport highway links Varanasi to the airport and goes on to Jaunpur, Sultanpur and Lucknow. With a flyover at Harhua and an ROB at Tarna, the road will reduce the travel time from Varanasi to the airport. This will prove a big relief to the people of Varanasi and to tourists and other visitors to the city.

The Ring Road, with two ROBs and a flyover, will provide a way for traffic on NH 56 (Lucknow-Varanasi), NH 233 (Azamgarh-Varanasi), NH 29 (Gorakhpur-Varanasi ) and Ayodhya – Varanasi highways to bypass Varanasi city, thereby reducing traffic congestion in the city. This will reduce travel time, fuel usage and pollution in the area. The Ring Road will provide easier and more convenient access to Sarnath, an important site for Buddhist pilgrimage. These projects will also provide increased employment opportunities, development of small and medium industries and give a boost to economic development in the area.

Prime Minister Shri Narendra Modi also dedicated to the nation three sewage infrastructure projects costing Rs 425.41 crore for the city of Varanasi and laid the foundation stone for another project. The first is a 140 MLD Sewage Treatment Plant (STP) at Dinapur built at a cost of Rs 235.53 Crore. The project includes 10 years’ Operation & Maintenance agreement. The second project includes three sewage pumping stations at Chaukaghat (140 MLD), Phulwaria (7.6 MLD) and Saraiya (3.7 MLD). The total cost for the three pumping stations was Rs 34.01. The third project is the construction of 28 km long relieving trunk sewer, rising mains and interceptor sewers along Varuna & Assi at a cost of Rs 155.87 Crore.

The PM laid the foundation stone for Sewerage Management Scheme for Ramnagar. This will include a 10 MLD STP and intercepting and diverting 4 drains. The sewerage projects will result in increasing the sewage treatment capacity in the city from 102 MLD to 242 MLD. The long term O&M provision will ensure that the STP is not only created but is being operated and maintained properly. These projects will result in reducing the pollution of the river Ganga.

These project along with two other ongoing projects of 120 MLD at Goitha and 50 MLD STP at Ramana will take the sewage treatment capacity in the city to 412 MLD, which will be adequate for the sewage treatment requirements till year 2035.
Addressing a large and enthusiastic gathering on the occasion, the Prime Minister said that the day is historic, for Kashi, for Poorvanchal, for Eastern India, and for the whole of India. He said that the development work that has happened today, should have been completed decades ago. He said that along with Varanasi, the entire country is now witness to how, the vision of Next Gen Infrastructure can transform the means of transport.

Referring to the arrival of the first inland container vessel in Varanasi, the Prime Minister said that Eastern Uttar Pradesh is now connected with the Bay of Bengal, through the water route.

He mentioned the various other projects, including roads, and projects related to Namaami Gange, which were inaugurated, or for which the foundation stone was laid.

The Prime Minister said that the inland water-way would save time and money, reduce congestion on roads, reduce the cost of fuel, and reduce vehicular pollution.

He said the road connecting Babatpur Airport with Varanasi was becoming an attraction for tourists, besides facilitating travel.
Shri Modi said that modern infrastructure has been built at a rapid pace in the last four years. He said that airports in remote areas, rail connectivity in parts of the North East, rural roads and highways have become a part of the Union Government’s identity.

The Prime Minister said that projects worth Rs. 23,000 crore have been approved under Namaami Gange so far. He said almost all villages along the banks of the River Ganga have now become open defecation free. He said these projects are part of the Union Government’s commitment to cleaning the River Ganga.

Speaking on the occasion, Union Minister for Water Resources, River Development and Ganga Rejuvenation, Road Transport & Highways and Shipping Shri Nitin Gadkari said that work is on for ensuring enough draught in River Ganga from its origin in Gangotri to its last point in Gangasagar in West Bengal. He said, during the forthcoming Kumbh, ferries will run between Varanasi and Prayagraj. Shri Gadkari said, as many as 268 water cleaning projects worth a thousand crore rupees are being undertaken in the country. In a recent examination of water quality at 80 places on Ganga, water was found pure at 55 sites. He expressed hope that these efforts will bear fruit and by coming March, 70 to 80 per cent Ganga will become pure.