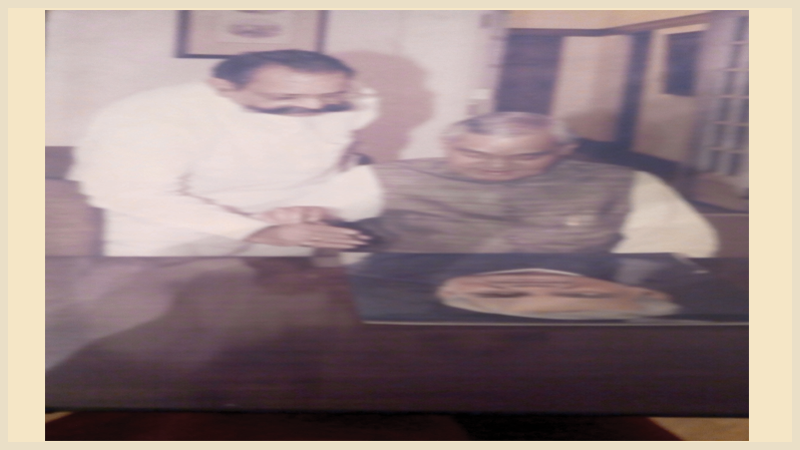 Shri Shiv Kumar Sharma, a close and long time associate of the former Prime Minister and Bharat Ratna Shri Atal Bihari Vajpayee talked to Kamal Sandesh Associate Editor Vikash Anand about the life and times of one of the most charismatic and tallest leaders of India, Atalji. Shri Sharma discussed about Atalji’s nature, his art of speech, the happiest moment and other aspects of his life. We are publishing the excerpts of the interview for our esteemed readers.

When and how did you come in contact with Atal ji?

Being a Swayamsevak of Sangh and worker of Jan Sangh I used to meet Atalji on various functions. After the tragic murder of Pt. Deendayal Upadhyay ji I felt that I must stay with Atalji. Once I requested Atalji that someone should be with him. He declined and said, “You have a family; you are a practicing lawyer in Supreme Court and my party and me are not in a position to give you something for your survival.”

I said, “Sahab! I will come to associate with you after completing all my responsibilities. I have already taken a decision and managed all my responsibilities. If you (Atalji) remain safe and sound, Bharatiya Jana Sangh will grow further and crores of workers like me will be nourished during its journey. Then, he agreed saying, “Come and join me”. Since 1967 I had been with him and stayed with him till the last journey of his life.

What was his daily routine?

When he was in sound health, he used to be on regular pravas. He travelled across the country. His stay in Delhi was minimal. He stayed in Delhi only during parliamentary sessions. But in 2005 he publicly declared that now he would be not active in politics. Only once in 2007 when Bhairon Singh Shekhawat was contesting the Presidential election, at that time Atalji called the meeting of NDA allies at his residence. In 2009 Atalji suffered a stroke and spent two months in hospital on ventilator. However, he came back to home after recovery. This time he was admitted in hospital for two months but could not recover from multiple ailments and left us for his heavenly abode.

What was the happiest and saddest moment of his life?

Have you ever seen him getting angry?

No, I have never seen him getting angry.

What were the hobbies of Atalji other than politics and literature?

What was his routine in free time?

He was always busy in party activities. He had no free time.

When did he find time for writing?

Generally, while travelling in train or car, he found time for writing and composing poems. Whatever a thought occurred in his mind, he wrote it on a piece of paper during his journey.

Can you tell any memorable incident of Atal ji which highly influenced you?

Every incident of his life influenced me. Actually, his happiness was my happiness and his sorrow was mine. Once, I had to go to receive Atal ji from airport. The plane was to land at 10 O’clock. It was delayed. At that time Mathurji (JP Mathur), was the secretary of BJP. He came and asked me to accompany him for a movie. I replied that at 9 O’ clock I had to leave for airport to receive Atal ji. I further added that his flight was delayed by one and half hours and would land at 10 O’clock. He said movie was of only one and half hours and asked me to accompany him. Under his repeated insistence I had to go with him. The movie was of more than two hours. I was in a soup. The flight landed on time without any delay. By the time I reached airport, Atalji had left for home. I had the keys of the house. I returned home to find that Atalji was taking walk outside in the lawn. Firstly, I did not dare to face him. Somehow, I mustered courage and opened the gate and took his briefcase. He asked where I was. I told him that I had gone for a movie. He asked why didn’t I inform him. He further said that had he told him he would have also accompanied him to the movie. Contrary to my fears, I was greatly relieved.

What were the noteworthy qualities embodied in Atal ji?

He had enormous patience. He did not meet people casually. He gave a patient hearing to help them and tried to solve their problems. Atal ji had ideal of Ram, vigour of Lakshman, gravity of Vivekananda, fascination of lord Krishna and concentration of Lord Buddha. These all five qualities were embodied in Atal ji. He used to say that tongue was required to speak and wisdom was required for keeping silence.

You have plans to write a book on Atal ji. Would you like to tell something about the book?

Yes, I want to write a book on Atalji. Let’s see if it becomes a reality. The proposed book’s name will be “Shradha, Samkalp and Sansmaran”.

What was your work with Atal ji?

My work was to assist him, keeping his documents properly, travelling with him, and to take care of his day to day requirements.

What was his favorite food?

He liked Khichadi very much. He also liked to cook Khichadi. He liked sweets but he had no specific sweet which he liked the most.

I recall an incident about it. He had gone to Mumbai. At a host’s residence, he was having meal. The host served rasgullas with meal. He (host) asked

how the Rasgulla was. Atal ji said, it was very good. The host came with two more rasgullas. We were on seven days of Maharashtra pravas. Now, wherever Atal ji went after that he found rasgullas in his meal. Atal ji asked why everywhere rasgulla was served. I told him that it was written in note book that you liked rasgulla. He said that I like all sweets but remove the name of rasgulla from the list. Atal ji said, “If you go to someone’s house and he serves food affectionately what would you say, whether food was good or not. You have to say it is good,” he said. 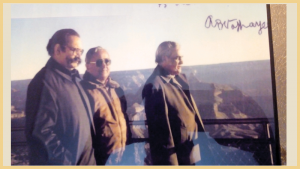 Mostly Atalji took Daal and Roti in meal. In the morning he took bread and a cup of milk. But he liked to drink milk at night. Since his childhood, he had habit to taking milk before going to bed. Once upon a time Deendayalji and Atalji were on pravas. During Night halt, Atal ji also insisted Deendayalji to take milk; but Deendayalji did not like milk very much.

Where did Atalji’s ancestors belonged to?

His ancestors lived in Bateshwar. His grandfather was well versed in Bhagwat Katha. He used to deliver sermons on Bhagwat Katha moving from village to village. He was also an Aashukavi(a ready poet). Atal ji’s father was also a poet. Atlal ji attended Kavi Sammelan with his father. He also started composing poem. This quality he got in legacy.

Atal Bihari Vajpayee along with his father got enrolled in a Kanpur college to study law. Both became classmates and roommates in hostel. Atal ji did not complete his study in law but his father completed the course. At the same time Atalji did MA with first division in political science. At that time law and MA could have been done simultaneously. He did BA with first division too. At that time Gwalior Raja had given scholarship to those who got first class. But there was a condition to get scholarship. The condition was that after completing study he/she had to join the service of Gwalior Raja. Atal ji did not agree with this condition and went to Kanpur to join DAV College for his MA.

Could you tell about his art of speech?

Maa Saraswati resided at the tip of his tongue. He was wizard of words. While delivering speech, his action happened according to his words. He knew reading the face of listeners and what audience expected of him.

If you want to know Atal ji then read his poems. He composed poem in humor, satire and also in anguish. He also composed poems on contemporary issues. ’Hindu Tanman, Hindu Jivan, Rag Rag Hindu Mera Parichay….,’ ‘Hriday Se Hridaymilav…’ are examples of his poems on contemporary issues. During Punjab disturbances he wrote ‘Doodh Me Darar Pad Gayi, Khoon Kyon Safed Ho Gaya’. He was Ajatashatru. He had good relations across the political parties.

Please tell something more about Atalji?

As Nehru ji was also jailed during freedom struggle, he had regards for him. After Independence, Nehru emerged as hero. In those days Jana Sangha had few seats in Parliament. So our leaders got very little time to speak in Parliament. Once Atal ji got chance to speak on foreign policy. In those days members generally spoke in English on foreign affairs. Atal ji spoke in Hindi. Nehru ji also replied in Hindi. Nehru ji said I had no idea that anyone could speak on foreign affairs so meaningfully in Hindi.

The same day Atal ji was invited to a function organized for foreign dignitaries of a communist country. Nehru ji also attended the function. He thought Nehru ji was angry for his criticism and remarks on foreign policy. Therefore, he stayed away from Nehru ji. However, Nehru ji called Atal ji and introduced him by saying that he was my country’s young opposition leader. Nehru ji further added that he (Atal ji) would be the future leader of our country. Even now, people remember Atalj i’s touching speech in Nehru’s Shardhanjali Sabha.