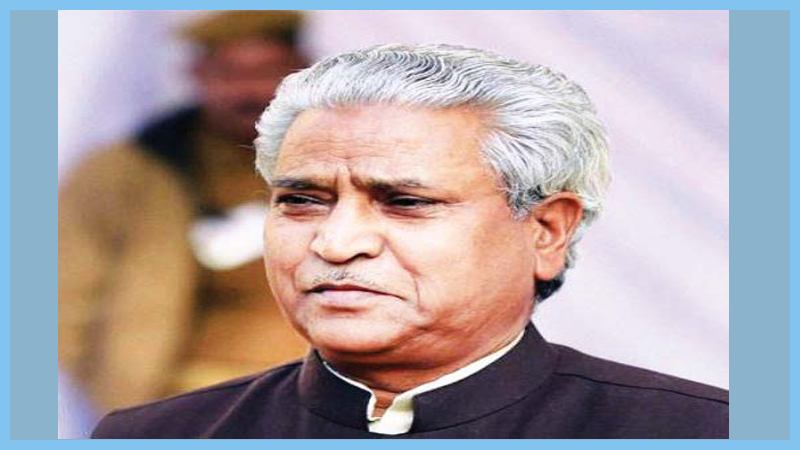 On the occasion of BJP Foundation Day on 6th April 2017, when party completes
37 years of its journey, Kamal Sandesh Executive Editor Dr. Shiv Shakti Bakshi discussed with BJP National General Secretary (Organization) Shri Ramlal various issues related to organisation and the course of action the party intends to take after massive mandate in the recently held assembly elections. Following are the excerpts:

The states where our structure was weak special efforts were made to strengthen them. As a result today we have BJP led government in Assam and in Odisha panchayat elections we have got good success.

BJP received a massive mandate in the recently held assembly elections. What is the message of this mandate for the party and karyakartas?

In the recently held assembly elections in five states we have definitely got a huge success. We have formed governments in four states. Our MLAs and votes – both have increased. We have got votes from all the sections of the society. Particularly due to the pro-poor policies and schemes the faith generated in the Union government, Prime Minister Narendra Modi and party leadership among the poorer sections is important for the party. That the people have voted rising above the politics of caste, creed and religion need to be understood.

Until now local issues used to dominate the elections. Now the people are moving towards good governance, development and people’s welfare oriented politics. It is a good sign for strengthening democracy. It is an achievement in itself to get more than three-fourth majority in Uttar Pradesh and Uttarakhand. Immediately after 2014 as the karyakartas started organisational preparations, planning new programmes and Parivartan Yatras, the people also came forward in support. It becomes easy to translate a will into vote and to bring people to polling booth when karyakartas are filled with enthusiasm, organisation is in order, people have faith in the leadership and election management is well in place. And it has happened. In Goa and Manipur although seats were less but people voted for BJP in highest numbers. Therefore the political responsibility to make efforts for a stable government was ours and the party leadership successfully shouldered that responsibility. In politics those who remain sleeping never get success, only those who are awake are successful.

While addressing the karyakartas on 12 March after the success in these states the words spoken by Prime Minister and Party National president are important. They said that the trees having fruits bow – success with humility. We need not get satisfied with any kind of success by considering it the ultimate stage. To make efforts to keep marching ahead by taking inspiration is the fundamental character of BJP Karyakartas. After the success of 2014 we started making preparations from the very first day. The states where our structure was weak special efforts were made to strengthen them. As a result today we have BJP led government in Assam and in Odisha panchayat elections we have got good success. The atmosphere which is prevailing now will definitely help in organisational expansion and consolidation increasing our influence in electoral politics.

Today BJP has become ‘party of governance’ which has increased the responsibilities of karyakartas manifold. In the changed situation how karyakaras should shoulder their responsibilities?

You have said BJP has become ‘party of governance’. It’s correct. Every party gets its own identity. Dr. Mookerjee’s sacrifice took place to defend the national unity and integrity, during emergency thousands of karyakrtas went to jail in defence of democracy, many were martyred in the struggle to defend Indian culture(Yatra by LK Advaniji), Tiranga Yatra by Dr. Murali Manohar Joshi for national pride, Pokhran test by AB Vajpayee’s government etc.

The development journey started by NDA-I was carried forward by BJP governments in the states. Gujarat mainly became a symbol of development and good governance in the leadership of Narendra Modi. Even today if comparative study of state government is undertaken BJP ruled states will be in the top five.

After forming clear majority government in 2014 the BJP under the leadership of Narendra Modi started getting identified with development, good governance and welfare of the poor and was successful in winning confidence of the people. This government came to be known for taking strong decisions in the interest of the nation. The surgical strike carried out by the brave soldiers of the country, demonetization, Neem coated urea, crop insurance scheme, loan given to 6.6 crore individuals under MUDRA scheme, against the target of 5 crore more than two crore gas connections given till date to the poor under UJJWALA, 27.97 crore accounts under Jan Dhan, BHIM App launched as a tribute to Babasahen having 2 crore downloads till now, passage of GST Bill creating a hassle free tax regime, Constitutional status to OBC Commission, Skill India, generic medicine shops at affordable price, distribution of 21.8 crore LED bulbs under UJJALA, electricity connection to 12,586 villages for the first time, social security schemes are some examples.

The party has planned for expansion in the entire country the results of which have started coming in. What kind of organisational plans are there for the coming years?

We conducted membership campaign with the aim to expand the organisation. It is the result of the able guidance of BJP National President Amit Shah and hard work by the karyakrtas that party has not only become the largest in the country but in the entire world.

We made special plans by identifying weak states, districts and mandals and training programmes are going on upto mandal level. Efforts are being made to continue the pace of work. Different state units are engaged in making and strengthening organisational structures upto booth level. Six programmes are to be observed in every booth to keep communicating with them and to make them active.

If compared to other parties BJP is continuously expanding. How do you see the journey from 2 to 282 in the parliament?

You have asked about the journey from 2 to 282. It was a difficult time when we got only two seats in 1984. At that time either one would have sat by plunging oneself in pessimism or one would have accepted the challenge boldly and endeavoured to move forward. The leadership chose to move forward. When work was started with dialogue with leaders, organisational programmes, different agitations, dialogue with people then the results came in 1989 itself. If we leave 2004 and 2009 then it can be said that we continued to move forward. Today BJP has the maximum numbers of MPs, MLAs and chief ministers. BJP is in government in 16 states. Seventeen states are with NDA. Around 60% of geographical area is under BJP governance. This journey was difficult, full of struggle but everyone as party worked by considering this challenge as an opportunity, the result is such a huge success for us to see now. Our effort is to move forward with the same mindset and enthusiasm.

Recently party has constituted 19 departments and many prakalps. What kind of direction and momentum will the party gain from this?

Cells, Departments and and Prakalps are formed so that party work reaches to every constituents of the society and special efforts are made on some specific issues. It helps in focussed work in some specific areas. Work has started in right direction in the areas of office construction, modernisation of offices, library etc. Work in the areas of Beti Bachao-Beti Padhao, Namami Gange, Swatchata Abhiyan etc. is also progressing well. These are helping in connecting many new people and party is also entering into new areas.

How party is celebrating the birth centenary of Pt. Deendayal Upadhyaya?

Organising committees have been formed from districts to national levels for celebrating Pt. Deendayal Upadhyaya’s birth centenary. Various state governments along with centre are working in their own ways. The direction of the work at organisational level is also clear – discussion on personality, ideas and life of Deendayal ji, one pious resolve to be taken personally by all karyakartas for welfare of the society and particularly Antyodaya (emancipation of the poor), plan for expansion of the organisation and development of karyakartas.

One special programme has been conceptualized – Pt. Deendayal Upadhyaya Rashtriya Karya Vistar Yojana (Pt. Deendayal Upadhyaya National Work Expansion Programme). Under this programme centenary vistaraks will devote time from six month to one year. Along with this a large number of (upto one lac) small time centenary vistarak will devote time for 15 days. Every state is going to undertake massive 15 days contact programme anytime between 6th April to 6th July. It has been planned that one picture of Deendyal ji, sticker and one folder (on personality and idea of Deendayal ji) should reach every home along with achievements of central and state governments and ideas of party. Other programmes will be organised as per the decision of different states.

On the occasion of BJP Foundation Day, 6th April 2017, what is your message to the party karyakartas?

6th April is the Foundation Day of the party. We are completing 37 years. Party has seen many ups and downs in these years but the resolve to move forward is continuously inspiring us. This party has been build on the sacrifice, hard work and selfless commitment of the karyakartas. In one district of Kerala (Kannur) alone large number of karykartas have been killed. Today we should take pledge to work for nation and society with single minded dedication. For us nation is first, party is second and self is last. Our inspiration is Integral Humanism and Antyodaya. In our thinking there is “Sabka Saath, Sabka Vikas”.’ We are working towards the goal of ‘Ek Bharat, Shreshtha Bharat’. We only work for the enhancement of reputation and image of India. We wish for glory of Bharat Mata!Bharat Mata ki Jai!