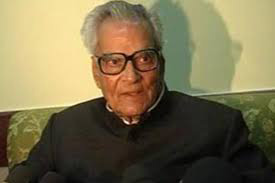 Shri Bhairon Singh Shekhawat was founder member of the Bharatiya Janata Party, a leading member of the National Democratic Alliance at the time of election. He served as the Chief Minister of Rajasthan three times, from 1977 to 1980, 1990 to 1992 and 1993 to 1998.

When Shri Bhairon Singh Shekhawat was Chief Minister started the “Antyoday Yojna” scheme, which was intended to uplift the poorest of the poor. The chairman of the World Bank, Robert McNamara, referred to him as the Rockefeller of India.

Shekhawat was also known for his control over bureaucracy and the police. He had involvement in policies designed to improve literacy and industrialisation in Rajasthan, as well as tourism centered on the themes of heritage, wildlife and villages. He was also lauded by both, national and international leaders for his historic conduct of the Rajya Sabha. Bhairon Singh Shekhawat passed away on 15 May 2010.