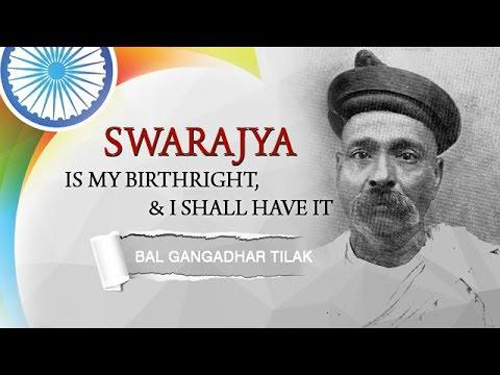 Bal Gangadhar Tilak born on July 23, 1856 in a middle class Chitpavan Brahmin family in Ratnagiri,was an Indian social reformer and freedom activist. He was one of the prime architects of modern India and probably the strongest advocates of Swaraj or Self Rule for India. His famous declaration “Swaraj is my birthright, and I shall have it” served as an inspiration for future revolutionaries during India’s struggle for freedom. The British Government termed him as the “Father of Indian Unrest” and his followers bequeathed upon him the title of ‘Lokmanya’ meaning he who is revered by the people. Tilak was a brilliant politician as well as a profound scholar who believed that independence is the foremost necessity for the well being of a nation.

Tilak was a brilliant student. He had an intolerant attitude towards injustice and had independent opinions from an early age. After graduating from Deccan College, Pune, in 1877 in Sanskrit and Mathematics, Tilak studied L.L.B. at the Government Law College, Bombay (now Mumbai). He received his law degree in 1879. After finishing his education, he started teaching English and Mathematics at a private school in Poona. He was among India’s first generation of youths to receive a modern, college education, Tilak strongly criticised the educational system followed by the British in India. He protested against the unequal treatment of the Indian students compared to their British peers and its total disregard for India’s cultural heritage. According to him, the education was not at all adequate for Indians who remained woefully ignorant about their own origins. He started the Deccan Educational Society with college batchmates, Vishnu Shastry Chiplunkar and Gopal Ganesh Agarkar for the purpose of inspiring nationalist education among Indian students. Parallel to his teaching activities, Tilak founded two newspapers ‘Kesari’ in Marathi and ‘Mahratta’ in English.

Gangadhar Tilak joined the Indian National Congress in 1890. In the congress he maintained that simple constitutional agitation in itself was futile against the British. He wanted an armed revolt to broom-away the British. Following the partition of Bengal by Lord Curzon, Tilak wholeheartedly supported the Swadeshi (Indigenous) movement and Boycott of British goods. But his methods also raised bitter controversies within the Indian National Congress (INC) and the movement itself.

During 1896, an epidemic of bubonic plague broke out in Pune and the adjacent regions and the British employed extremely rigorous measures to contain it. Under directives from Commissioner W. C. Rand, the police and the army invaded private residences, violated personal sanctity of individuals, burned personal possessions and prevented individuals to move in and out of the city. Tilak protested against the oppressive nature of the British efforts and wrote provocative articles on it in his newspapers.

His article inspired the Chapekar brothers and they carried out assassination of Commissioner Rand and Lt. Ayerst on June 22, 1897. As a result of this, Tilak was imprisoned for 18 months on Sedition charges for inciting murder.

His wife died in Pune while he was languishing in Mandalay prison.

In 1915, Tilak was released. He then returned to politics. Deciding to re-unite with his fellow nationalists, Tilak founded the All India Home Rule League in 1916 with Joseph Baptista, Annie Besant and Muhammad Ali Jinnah. By April 1916, the league had 1400 members that increased to 32,000 by 1917.