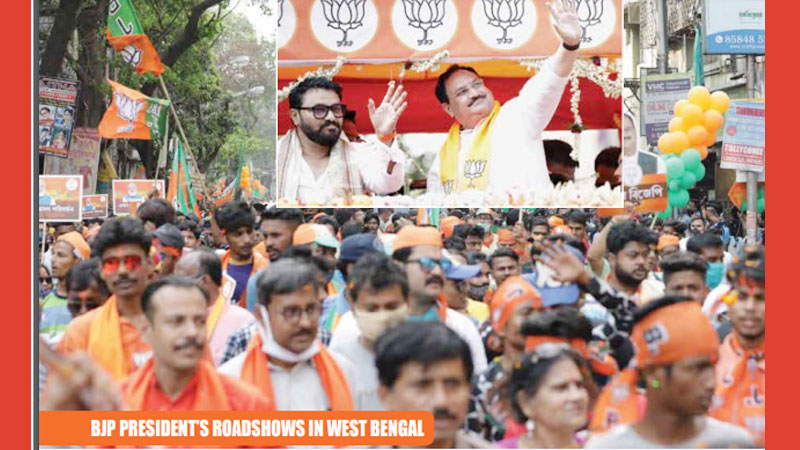 Amid the ongoing assembly elections, BJP National President Shri JP Nadda held a massive roadshow in Tollygunge, West Bengal on 05 April, 2021. The roadshow, which commenced from the tram depot, was culminated at Garia More, spanning a distance of around 5 km.

Standing atop a lorry, decorated with flowers and BJP flags, Shri JP Nadda, along with Shri Supriyo and Ms. Sarkar was seen waving at the crowd, amid chants of ‘Jai Shri Ram’, ‘Narendra Modi Zindabad’ and ‘JP Nadda Zindabad’ by party supporters.
Thousands of people queued up on both sides of the road as the rally inched forward through the crowded streets.

The BJP National President said, “The people in West Bengal are fed up with Mamata Didi’s vote bank politics and therefore, BJP is getting massive support of the public in the state. I can assure the state that the BJP is committed to giving fear-free life and rapid development to the people of West Bengal.

Addressing the supporters participating in the roadshow, Shri JP Nadda said BJP will form the government with more than 200 seats in West Bengal. The BJP President said, “The way people have gathered today shows how much they love us.”
Speaking on rampant scams and coal scam in the state during the TMC rule Shri Nadda said those who are involved in these scams will not be spared and they will be punished.

He accused TMC of corruption and said that all the money meant for Covid and Amphan victims were taken by TMC. “ This is the time to save Bengal’s culture, people of Bengal have to answer those extortionists,” Shri Nadda said.

BJP National President Shri JP Nadda held a huge roadshow in Bally, West Bengal on 31 March, 2021. He said Chief Minister Ms. Mamata Banerjee will lose the election in Nandigram when the results are out on 02 May.

Shri Nadda said, “Khela aar hobe na. Khela sesh (the Trinamool game has come to an end). The Bengal CM knows it better whether her campaign on a wheelchair helped her, but the people have decided. Mamataji is going to lose Nandigram,” the BJP President said.

Shri JP Nadda began the day by offering prayers at Belur Math. He was accompanied by the BJP candidate from Bally —Baishali Dalmiya. Later, he attended a roadshow.
The BJP National President said, “Did Didi come over to Nandigram to contest the polls or did Suvendu Adhikari go to Bhaowanipore? It is quite clear that she had left her home constituency and come over to Nandigram to take on her former Cabinet colleague,” he said.

While referring to the high polling in the 30 seats that went to polls in the first phase, the BJP President said, “The average polling in the first phase was 79%. It saw people coming out in huge numbers in West Bengal polls 2021. It shows the TMC game has come to an end. If 80% people have come out to vote, it means they have decided to vote against Trinamool”.

Shri Nadda was optimistic about a further swing in favor of the BJP from the third phase onwards and also thanked the Election Commission for ensuring a violence-free poll in all the state.