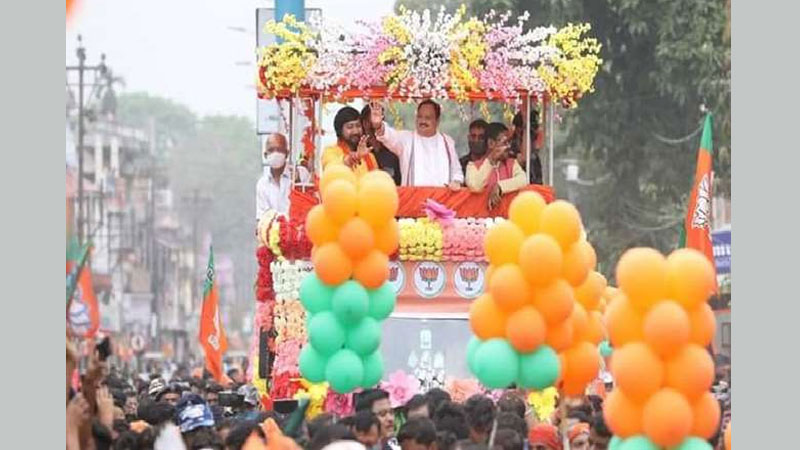 ROADSHOWS IN ALIPURDUAR, MEKLIGANJ AND DINHATA

Shri Nadda said people are dejected with Mamata Banerjee and now they are on the streets to support the BJP. He expressed confidence that the BJP will bag over 200 seats and win the elections in West Bengal.

Shri Nadda further said that Ms. Mamata Banerjee’s comments and behavior shows that she has accepted defeat from the very first round of the election.

During a roadshow at Alipurduar in West Bengal Shri Nadda said, “Ms. Banerjee, who is alleging that the CRPF was harassing people in West Bengal, has definitely accepted her defeat. Such statements coming from a person who holds a responsible office such as the Chief Minister’s Office shows that she has accepted the defeat “.

He said in West Bengal Trinamool Congress is fighting only to keep the Bharatiya Janata Party’s surge at bay. And out of frustration they have attacked party state President Shri Dilip Ghosh today. This is what Mamata ji’s goons do. It is unfortunate.

Shri JP Nadda further said, “This gathering here wants to give rest to Mamataji and ready to bring BJP to power in the state.