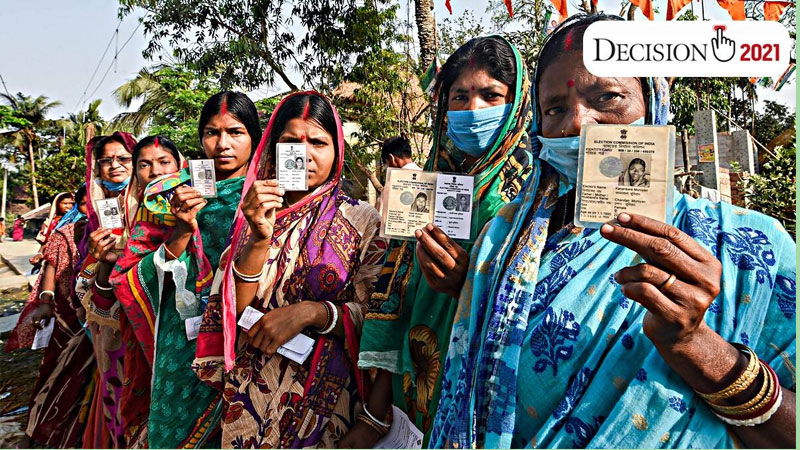 The voting percentage for Assembly elections in West Bengal, Assam, Kerala, Tamil Nadu and the Union Territory of Puducherry has seen a high turnout since March 28, 2021. As per the announcements of Election Commission of India, the polling percentage in first three phases of West Bengal election has seen a sharp upward trend. In Assam, the elections have held in three phases starting from March 28, 2021; while the polling has already concluded in the remaining Kerala, Tamil Nadu and Puducherry in a single phase on April 06.

Till the conclusion of third phase on April 06 voting for more than 750 constituencies spread across four states and one union territory concluded. The fourth phase of elections will take place in West Bengal on April 10. Counting of votes in all these States and UT will happen on May 2. The polling percentage recorded in the following States and UT are as follows;

• The kind of massive support we got from people in West Bengal in the first two phases of elections and based on the feedback from the ground I can confidently say that we are going to form Government in West Bengal. In Assam also, the Bharatiya Janata Party led National Democratic Alliance will again form a strong government in the state. The Bharatiya Janata Party and its alliance partners will also form government in Puducherry.

• In West Bengal the people of the state have outrightly rejected the politics of corruption, nepotism, appeasement, anarchy, criminalization by Mamata Banerjee and the Trinamool Congress in the state. People are fed up by misgovernance under Mamata Didi and have overwhelmingly voted for the Bharatiya Janata Party.

• In Assam the Bharatiya Janata Party government has done exceptionally good and has taken Assam towards growth and development, has done Bodo pact, preserved Assam’s rich culture and traditions. With people’s support we are again going to form our government in the state.

• In Puducherry the people are fed up with the Narayanasami government and people are now supporting us. The Bharatiya Janata Party along with NR Congress is going to form government in Puducherry.

• Our great leader MGR started a new era of development by empowering poor and farmers by implementing pro-poor policies which were replicated by Selvi Jayalalitha ji. Many of their welfare programmes were replicated at all India levels also by various governments.

• I am confident that the Bharatiya Janata Party is forming government in West Bengal and Puducherry, retaining in Assam, forming alliance government in Tamil Nadu. And in Kerala, we will do very good. The atmosphere I see everywhere in all the five states, the issues raised by NDA have been well appreciated by the people.

• I pay my deep condolences to the brave jawans who died in the Naxal attack in Chhattisgarh. I pray to God to give courage to the family members of the brave soldiers. The Union Home Minister Shri Amit Shah ji has taken this matter very seriously. He has cancelled all his trips and programmes and is taking stock of the situation. The sacrifices of our jawans will not be forgotten or wasted.