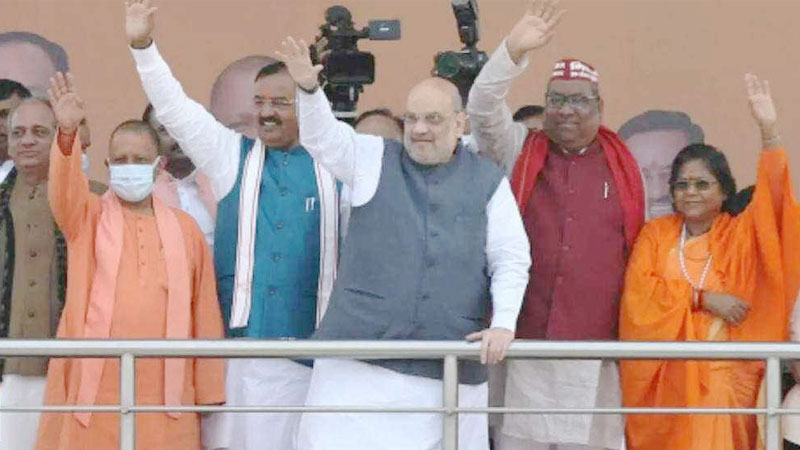 Union Home and Cooperation Minister Shri Amit Shah addressed the rally of Nishad Samaj at Rama Bai Ambedkar Maidan in Lucknow on 17 December, 2021. He called upon the people of the state to make the Nishad Party-BJP alliance victorious by a huge margin.

Shri Shah started his speech by paying homage to King Nishadraj of Shringverpur. The Union Minister, who was amazed by the huge crowd gathered in the rally, said that the BJP-led Yogi Adityanath government of Uttar Pradesh is setting new dimensions of development under the leadership of Prime Minister Shri Narendra Modi. With the immense support of the people, it is certain that the Bharatiya Janata Party is going to form the government in Uttar Pradesh with a huge majority by winning more than 300 seats.

The Union Home Minister said that as soon as the Bharatiya Janata Party government was formed at the Center in 2014, Prime Minister Shri Narendra Modi had made it clear that his government would be a government dedicated to the villages, poor, backward, dalits and tribals of the country. There were governments of SP, BSP and Congress in the country and in Uttar Pradesh for years, but did gas connection come to the house of the poor, did someone bring gas to their homes? There was no toilet in the house, no drinking water. The poor did not even have their own homes. Health insurance was a far cry.

The Union Home and Cooperation Minister said that SP and BSP claim themselves to be backward parties, they continued to support the Congress governments at the Center, but no one has done the work of giving constitutional recognition to the Backward Classes Commission. It is the Bharatiya Janata Party government at the center under the leadership of Prime Minister Shri Narendra Modi, which gave constitutional recognition to the Backward Classes Commission.

Shri Shah said that SP-BSP divided the society for caste. Even by deceiving their castes, they only did good to their family only. But, Prime Minister Shri Narendra Modi is working for the welfare of the people and all round development of the country following the concept of ‘Sabka Saath, Sabka Vikas, Sabka Vishwas and Sabka Prayas’. The Bharatiya Janata Party government, which is about to be formed again in Uttar Pradesh under the leadership of Yogi Adityanath with a huge majority, will try to fulfill all the demands of the Nishad society.

Shri Shah said that PM Shri Narendra Modi has given lakhs of crores of rupees in the last seven years for the development of Uttar Pradesh. Some time back he has inaugurated Shri Kashi Vishwanath Dham. On other hand, a grand temple of Lord Shri Ram is going to be built in Ayodhya. It is a matter of pride for all of us countrymen.