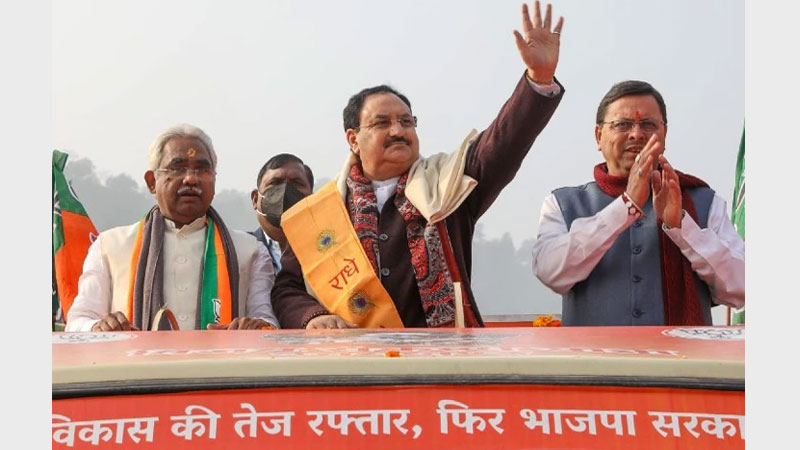 The ‘Vijay Sankalp Yatra’, which plans to cover all the 70 Vidhan Sabha constituencies in Uttarakhand, was launched by BJP National President Shri Jagat Prakash Nadda, in the holy city of Haridwar on 18 December, 2021. As part of the Yatra, which will conclude on January 05, the party plans to touch about most of the voters about the work done by the double engine government of the central and state for the development of the state.

If we talk about the development of the state, the statement by PM Shri Narendra Modi, that we will use double engine government to take Uttarakhand towards development, has turned true.

Addressing the office bearers and Karyakartas, Shri JP Nadda said BJP governments at the centre & state have taken Uttarakhand on a new road of development.
The BJP National President said, “When I see this enthusiasm, excitement and gathering of people, it shows that the people of Uttarakhand and Haridwar have made up their mind to give BJP their blessing again”.

He said, “If we talk about the development of the state, the statement by PM Shri Narendra Modi, that we will use double engine government to take Uttarakhand towards development, has turned true. We are happy to say that in the last five years, PM Shri Modi has given over Rs 1 lakh crore to the state for its development”.

Addressing a public gathering, Nadda said, “We have seen a new story of development in Uttarakhand. Earlier, when a passenger used to come to Uttarakhand, he used to get the one signal – one-way traffic. Now all roads are open 24 hours in BJP government.” The ‘Vijay Sankalp Yatra’ by the party will be completed in two phases. While Shri JP Nadda launched the first phase for Garhwal Mandal from the pilgrimage city of Haridwar on 18 December, Union Minister Shri Anurag Thakur launched the ‘Vijay Sankalp Yatra’ of Kumaon Mandal from Bagheshwar on 19 December.