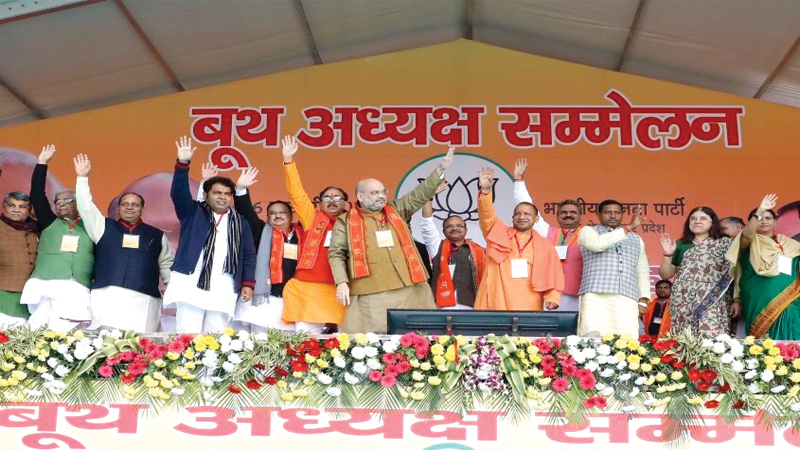 Bharatiya Janata Party National President Shri Amit Shah on 06 February, 2019 targeted the opposition parties over contentious issues including Ayodhya dispute and the National Register of Citizens (NRC) while addressing a huge rally of party’s booth-level workers in Aligarh, Uttar Pradesh. He said the BJP is committed for construction of a Ram temple at the same site in Ayodhya and dared the Congress, the Samajwadi Party (SP) and the Bahujan Samaj Party (BSP) to clarify their stand on the matter.

Shri Shah said the Narendra Modi government submitted an affidavit in the Supreme Court to return the land acquired near the disputed site in Ayodhya by the Centre to its owners. “We want that a grand Ram temple is constructed at the same spot (where there was Mughal era Babri Mosque). The Congress, the SP and the BSP, if they have guts, should clarify their stand on Ram temple,” said Shri Amit Shah.

On the question of the NRC, which is being prepared for Assam, Shri Shah said the Modi government wants to implement the register of citizens but Congress president Rahul Gandhi and other opposition leaders are opposing it. Should not we drive away the infiltrators, Shri Shah asked the huge gathering from the stage.

“After winning 2019 Lok Sabha elections, the Modi government will drive out every single infiltrator from the country. Infiltrators can be vote bank for the SP and BSP but it is a question of national security for the BJP,” Shri Shah said.

The BJP President mocked the opposition’s attempt to present a united front against the BJP-led NDA in the upcoming Lok Sabha elections saying, “The grand alliance is a farce…It won’t make any difference to the election results.”

He said West Bengal Chief Minister Mamata Banerjee, Andhra Pradesh Chief Minister N Chandrababu Naidu and other leaders of the grand alliance are all regional leaders with no national influence.