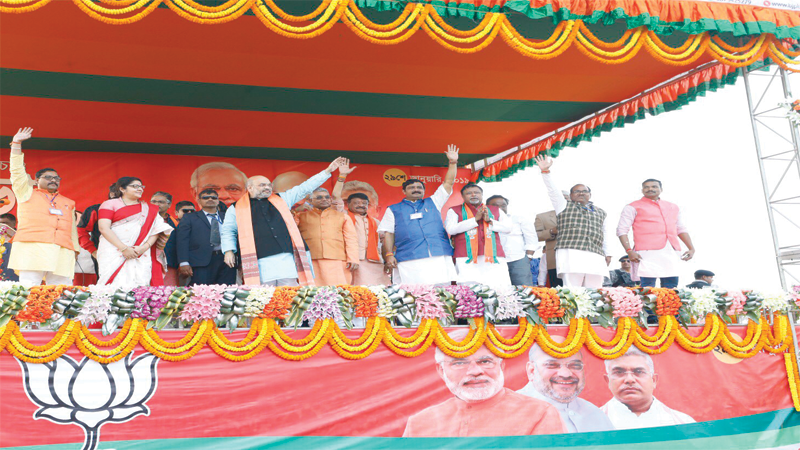 The golden Bengal that Rabindranath Tagore spoke of is missing today; can you see it, asked BJP National President Shri Amit Shah. He was addressing a massive rally in East Midnapore in West Bengal on 29 January, 2019.

Shri Shah said the people of India are today looking at Bengal. “But what has happened to Bengal? Where did ‘Sonar Bangla’ (golden Bengal) go?” he asked.

Blaming the Mamata Banerjee-led Trinamool Congress government for its mis-governance he said Bengalis in India are looking for a golden Bengal today but present condition of Bengal disappoints all, Shri Shah said.

Shri Amit Shah also slammed the Mamata Banerjee-led Trinamool Congress government in West Bengal and said for the rest of the country the Lok Sabha election may be about making Shri Narendra Modi as Prime Minister again. “But for people in Bengal, this election is about making Bengal ‘Sonar Bangla’,” he said. He further added the upcoming Lok Sabha polls would be about restoring democracy in the state.

The BJP National President mocked Priyanka Gandhi for becoming the AICC general secretary of Uttar Pradesh East and said a government run by a dynasty could not serve the people but could only provide a “majboor (helpless) government.”

Mocking the entry of Priyanka Gandhi into active politics, he said, “During the UPA rule, we had witnessed huge scams such as 2G. Now the third G has jumped on the bandwagon…. Now we have Priyanka G (Gandhi). What will be the amount of the scam? So now, they (the Congress) want to add 2G and the third G and indulge in more corruption,” Shri Shah said.

The BJP President also raised the issue of the Citizenship Bill. He said, “I would like to ask Mamata ji if she will support the Citizenship Amendment Bill in the Rajya Sabha. Tell the people of Bengal.”

He said, “I would like to tell all the refugees in West Bengal that BJP and Narendra Modi government will grant them the citizenship.”

TMC supporters clash with BJP workers after the rally

Notable, the BJP rally was reportedly attended by lakhs of BJP workers and supporters and the TMC had planned a bike rally in the area during the same time. However, as the BJP workers were returning towards their buses after Shri Amit Shah’s rally, a massive traffic jam was created and the cops failed to manage it. Because of this, the TMC workers clashed as the TMC bike rally could not take place due to the jam.