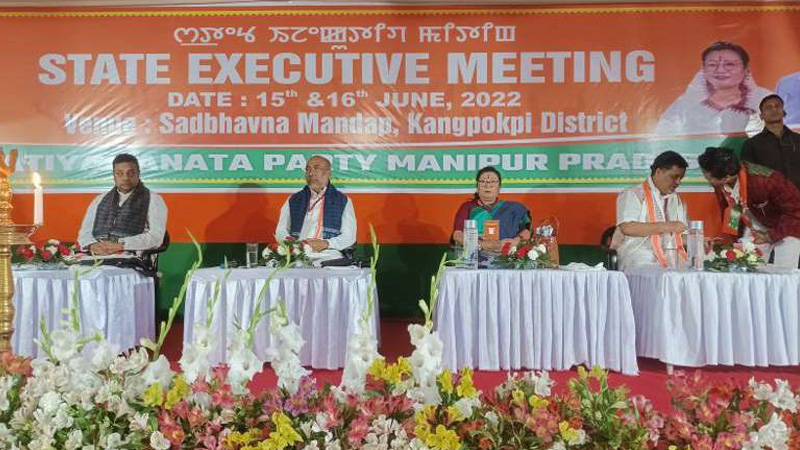 On way to Kangpokpi in Manipur to attend the State Executive Meeting, BJP National General Secretary (Organisation) Shri BL Santhosh was given a warm welcome by a large number of Thoudou tribe people and students.

Delivering an inspiring address at the meeting Shri BL Santhosh reminded every BJP Karyakarta about the party’s value system. He urged everyone to strengthen the value system with hard work and dedication in the coming days for a strong and committed party organisation.

Addressing the valedictory ceremony, Chief Minister Shri N Biren Singh said the people have faith in BJP and the party workers must conduct public affairs with this in mind. He categorically stated that the BJP is devoted to save Manipur.

All State planning must be done to represent the interests of future generations, the Chief Minister said and added that Prime Minister Shri Narendra Modi and Union Home Minister Shri Amit Shah are also committed to make Manipur a more peaceful and progressive State.

He highlighted the core principle of the BJP, stating that the concept of Nation-building is at the heart of the party.

Stressing upon the need to discuss the history of BJP and its leaders, Shri N Biren said that the BJP is committed to continue the War on Drugs 2.0 campaign so as to remove drug menace from the State.