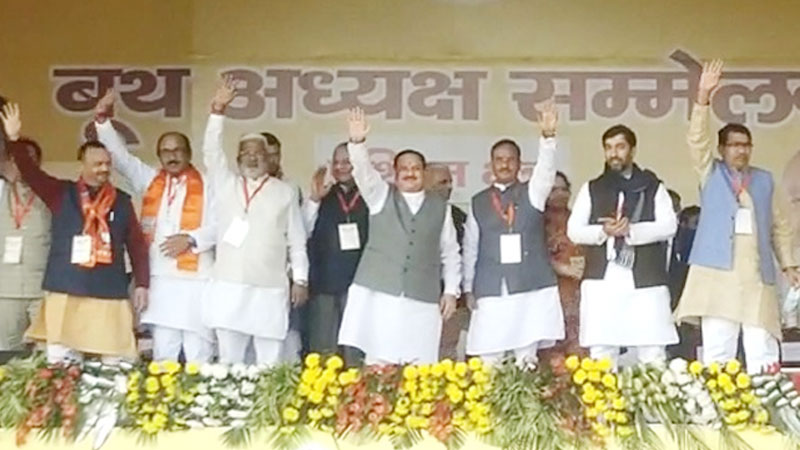 BJP National President Shri Jagat Prakash Nadda during his Uttar Pradesh Pravas attended a massive organisational Booth Adhyaksh Sammelan in Meerut on 01 December, 2021. Ahead of the next year’s Assembly Polls thousands of Booth Presidents from 14 districts of western Uttar Pradesh attended the meeting.
While addressing Booth Adhyaksh Sammelan BJP National President Shri JP Nadda said, “We have to ensure that BJP under Yogi Adityanathji’s leadership returns with a massive mandate and this can be achieved through booth victory. If the booth is won, we win”.

SALIENT POINTS OF THE SPEECH

The kind of dedication, devotion and commitment I have seen among the Bharatiya Janata Party workers for the party, for the people of Uttar Pradesh, I am very sure and confident that the BJP will register a massive victory in Uttar Pradesh assembly elections.

Our workers are committed and devoted to work for the welfare and upliftment of every section of the society and this is what has resulted in people showering their blessings and support for the Bharatiya Janata Party in Uttar Pradesh and across the country.

We are ardent followers of democracy, but Opposition parties are supporters of ‘Danga-Tantra’ and they leave no chance to fuel disharmony and rift in the society. During the Akhilesh Yadav government in Uttar Pradesh there were more than 700 riots that took place in the state in which over 100 people lost their lives. We have not forgotten the Muzaffarnagar riots which started on August 27, 2013 and we also remember how the killers of Sachin and Gaurav were freed by the Akhilesh Yadav government.

The Samajwadi Party leaders are trying to hide their old faces and are coming out donning new faces. Today, I want to warn everyone and clearly tell the people of Uttar Pradesh that this is no new Samajwadi Party, it is the same old Samajwadi Party.

During the Akhilesh Yadav government 15 terrorists were captured, but the then Samajwadi Party government had got them freed saying that they were innocent. Later on the orders of the High Court all the terrorists were again arrested and all were found to be guilty and were convicted. Out of these four were awarded capital punishment, while life sentences were given to many others by the court. It is a very unfortunate and sad example of dynasty politics that some Opposition parties are ready to compromise with the safety and security of our country just to get some votes and win elections.

Notably, all the other parties in Uttar Pradesh do the politics of caste and religion, they tie up with anti-national forces and join hands with divisive forces that hurts India’s interests, they consider Jinnah as their ideal in place of Sardar Patel and always conspire against the country.

The timely payments of sugarcane crop to our farmers underline the politics of development and progress of the Bharatiya Janata Party, while the base of the Opposition party is Jinnah and they have nothing else to offer. The Bharatiya Janata Party will fight elections on the issue of sugarcane by winning their trust and support, and we will defeat the ideology of Jinnah in Uttar Pradesh.

Till now over Rs 1.41 lakh crores have been disbursed to sugarcane farmers in Uttar Pradesh alone. What is significant and important is that the payment includes Rs 11000 crore dues which were pending on the Akhilesh Yadav government which were also cleared by Chief Minister Shri Yogi Adityanath.