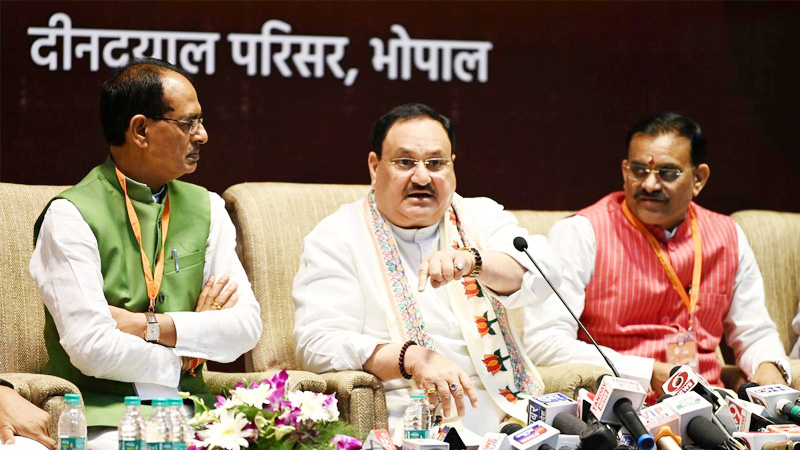 Bharatiya Janata Party National President Shri JP Nadda in a two-day Pravas visited Madhya Pradesh from 01 June, 2022. During the pravas, he participated in organisational programmes in Bhopal and Jabalpur. On reaching the capital city Bhopal, Shri Nadda was given a grand welcome by thousands of party leaders and Karyakartas. Chief Minister Shri Shivraj Singh Chouhan, BJP State President Shri Vishnu Dutt Sharma and other senior leaders were present on the occasion.

The BJP National President also reached Motilal Nehru Stadium and addressed a meeting of the BJP State Working Committee and later a press conference in the state party office in Bhopal.

Shri Nadda reached Jabalpur in the evening where the party Karyakartas gave a grand welcome to him at various places between the airport and BJP office. On June 02, he participated in a booth meeting organised in booth number 106 Mandal of Shaheed Bhagat Singh Cantt Legislative Assembly constituency. Shri Nadda attended a meeting of the core group at the divisional party office and addressed the meeting of the economic and social media group in the divisional party office. The BJP National President also participated in the Youth Connect programme of Bharatiya Janata Yuva Morcha organised at the Veterinary College Ground.

Addressing the Press Conference Shri Jagat Prakash Nadda said the remarkable journey of growth and development of the country under Prime Minister Shri Narendra Modi has considerably improved the living standard of the common man across the country. It is the people belonging to the weaker sections of our society, the poorest of the poor who have been benefited the most by the socio-economic interventions of the Bharatiya Janata Party government. Under the leadership of Prime Minister, India is not only successfully defeating poverty but also we are consistently creating new records in investments, exports and growth rate. This is the story of the making of ‘New, Vibrant India’.

Under the Pradhan Mantri Gareeb Kalyan Anna Yojna over 43.53 lakh metric tonnes of food grains have been distributed to poor and needy people in Madhya Pradesh. Under the PM Kisan Samman Nidhi Yojna over 82 lakh farmers have been benefited in Madhya Pradesh. So far over Rs 2.01 lakh crores have been transferred to over 10 crore farmers across the country. This money has gone directly into the bank accounts of our farmers without any interference of middlemen or commission agents.

CONGRESS IS SYNONYMOUS TO CORRUPTION

Shri Nadda said, “I urge you to continue to work for the party with the same vigour, devotion and dedication which will ensure that the present and the future will continue to be of the Bharatiya Janata Party”.

‘DUE TO YOUTH’S CONTRIBUTION, BJP IS IN POWER’

BJP National President Shri JP Nadda addressed the ‘Youth Connect’ Program in Ranital, Madhya Pradesh on 02 June, 2022. While addressing the youth, he said due to youth’s contribution, BJP is in power. He said the name of the force that changes society is youth. The youth of the country is the tool to fulfill the dream of India of tomorrow. Speaking to the Youth, JP Nadda said that the youth have to strengthen their shoulders and understand the problems that are coming and fight them with full force.

Shri Nadda said that youth play an important role in the progress of any country and society and youth play an important role in change. At the age of 32, Adi Guru Shankaracharya gave the message of spirituality to the whole world. Swami Vivekananda gave a new definition of Hindu culture and Indianness to the world at a young age. The freedom struggle that Mahatma Gandhi started in 1915 gained momentum only in 1925 when youths like Netaji Subhash Chandra Bose, Bhagat Singh, Chandrashekhar Azad, Sukhdev and Rajguru joined. By becoming a part of the JP movement in 1977, lakhs of youth played an important role in forming a government free from corruption and nepotism in the country. That is why the name of change is youth, the name of new enthusiasm is youth, the name of new thinking is youth, the name of the force that changes the society is youth. Shri Nadda said that India is a fortunate country which is called a youth country.