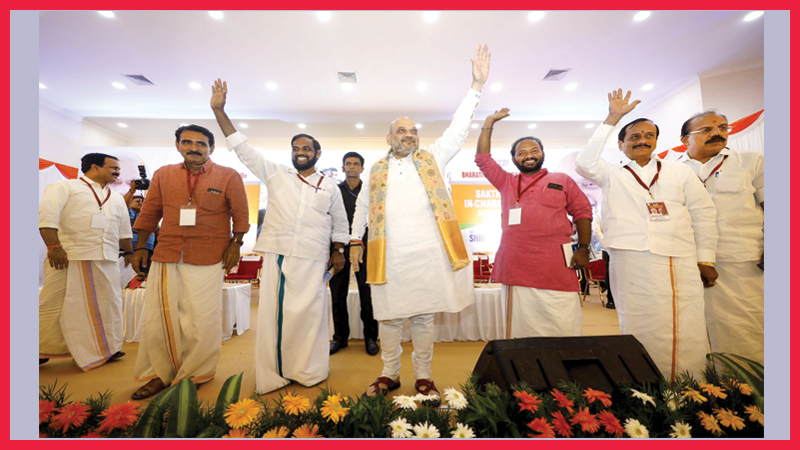 BJP National President Shri Amit Shah arrived in Thiruvananthapuram, Kerala on 03 July, 2018 on one day Kerala visit, seeking to tone up the party apparatus and cadres ahead of the Lok Sabha polls next year.

Shri Shah was accorded a rousing welcome at the airport by BJP state leadership and party workers.

He attended a meeting of the party’s state core committee members on the progress in the electioneering plans for Lok Sabha elections which was chalked out during earlier visits, addressed leaders from select districts, attended the joint meeting of leaders in charge of Parliamentary constituencies as well as full-timers assigned to these constituencies and inaugurated a convention of party workers of 6 parliamentary constituencies of southern Kerala that are; Thiruvananthapuram, Attingal, Kollam, Pathanamthitta, Alappuzha and Mavelikkara etc.

Later, he met the senior leaders of the RSS and other affiliated organizations. Shri Shah also met some prominent people of the state as part of his ‘Sampark for Samarthan’ initiative to inform them about the achievements of the Modi government, and also hold discussions with leaders from Lakshadweep.

Addressing the workers convention from six Lok Sabha constituencies in South Kerala, BJP President said the saffron party’s mission would be complete only with the formation of its governments in Kerala, Telangana, Andhra Pradesh, Odisha and West Bengal.

Referring to the party position in Kerala, Shri Shah said the BJP was making “steady progress in the right direction” despite the political violence against its cadres unleashed by ruling CPI-M. He said the martyrdom of BJP-RSS workers would not become meaningful unless the CPI-M was rooted out of Kerala as it happened in Tripura and West Bengal. Alleging that chief minister Pinarayi Vijayan was responsible for the political violence in the state, Shri Shah said 84 RSS-BJP workers had been killed in Kannur, the home district of Vijayan.

The BJP president also alleged that political clashes were not based on any ideology, and said it was state sponsored killings. “The BJP does not believe in retaliating violence with violence, but with development.”

Listing the various schemes and development projects initiated by the Narendra Modi government, Shri Shah said NDA was able to provide a corruption free and transparent government to the country in contrast to the earlier Congress-led UPA regimes.

“The government of Prime Minister Narendra Modi has completed four years in office. Even Opposition has not been able to level a single graft charge of one rupee against the government,” he said. “We have been able to provide a transparent government,” he added. PM Shri Modi was able to enhance the pride of the country abroad, he said. The large gathering and warm welcome the Prime Minister was getting in each country was actually not for him or the BJP, but for the 125 crore people of India, he said. Earlier in the day,Shri Shah also addressed a core committee meeting of the party’s state unit.

Pravas in Bhubaneswar, Odisha
‘Will sweep polls in Odisha’ 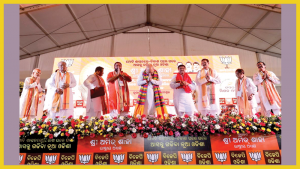 BJP National President Shri Amit Shah on 01 July, 2018 said that party would win the Lok Sabha and the Assembly elections in Odisha in 2019. Shri Shah, who was on a one-day visit to the State to take stock of the party’s poll preparedness, addressed a meeting with Shakti Kendra in-charges and co-in-charges in Bhubaneswar, Odisha.

He said, “With such energy and enthusiasm among Odisha BJP karyakartas, BJP is all set to sweep Odisha in 2019 under the leadership of PM Shri Narendra Modi.”

Over 2,400 panchayat-level Shakti Kendra committee heads and their deputies had assembled in Bhubaneswar to hear him. Shri Shah has given a call to party workers to work towards winning at least 120 of the 147 seats in the Assembly elections in the state.

On the issue of the missing keys to the Ratnabhandar (treasure) of the Jagannath temple, the BJP President criticized the Naveen Patnaik government for failing to “safeguard the aspirations of Hindus”.

In five back-to-back closed-door meetings, Shri Shah met senior party functionaries and grassroots workers of the Cuttack, Bhubaneswar and Puri Lok Sabha constituencies. “The party has been making sustained preparation for elections. The party president noted down feedback. Leaders also got to know what is expected of them”.

Earlier, BJP National President was given a rousing welcome by BJP State President Shri Basant Panda and other Party Senior leaders, Union Ministers Shri Jual Oram and Shri Dharmendra Paradhan and scores of party workers on his arrival at the Airport.

Bharatiya Janata Party National President Shri Amit Shah on 30 June, 2018 asked party leaders in the North-East to work hard to ensure party’s victory in the upcoming assembly and Lok Sabha elections this year and the next.

“Our National Party President wants us to work hard to win the elections. He also advised us to join hands with a regional party in Mizoram to fight the ruling Congress”, BJP Mizoram General Secretary Shri Vanlal Hmuaka informed it to the media after meeting with Shri Shah.

Sharing a similar sentiment, BJP Arunachal Pradesh President Shri Tapir Gao after the meeting with the BJP National President said, “In our meeting with Shri Amit Shahji, we discussed about our party’s strategies, planning and organizational matters to win all the seats in the forthcoming elections.”