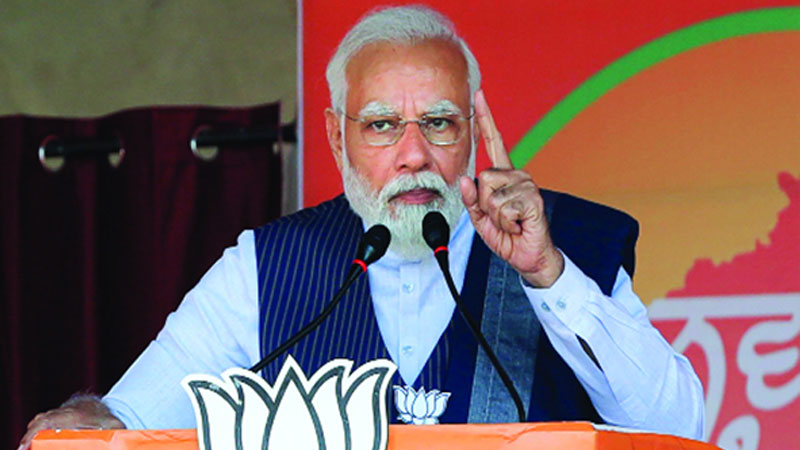 Amidst the ongoing election campaigning in Uttar Pradesh, PM Shri Narendra Modi’s ralllies continued as he addressed massive public meetings in Hardoi, Unnao, Fatehpur, Sitapur and several other places. Addressing the voters of UP, Shri Modi said that the current Double Engine government is the one for the poor, for the farmers and the youth and has been working day and night for their betterment. He said, “I know, this time the people of UP are preparing to play Holi with colours twice”.

Talking about the success of Double Engine Sarkar in UP, he said, “The work for the poor in UP started when in 2017 you formed a Double Engine Sarkar here.” He added that our government helped build housing for the poor, built toilets for all, provided gas cylinders to women and gave health its due importance as well.
The PM said, “There has been such a big global pandemic of Corona. We did not allow any poor to go to bed hungry. Free ration is being given to every poor through Pradhan Mantri Garib Kalyan Yojana.”

Highlighting on the status of terrorism in the country, he said, “You have seen, just a few days ago the culprits of the Ahmadabad bomb blast have been punished. Those who wanted to destroy us Indians have been punished by the court.” PM Modi also iterated that Kashi had also faced serial bomb blasts at Temples, Railway stations. He also highlighted other attacks like the 2007 terrorist attack in Gorakhpur, Lucknow and Ayodhya and said, “These terrorists were creating havoc in UP and the Samajwadi Party government was not even allowing these terrorists to be prosecuted.”

Revealing the stark differences between BJP and others, Shri Modi said, “Someday the opposition insult the Indian Army, someday they insult the police. These people shed tears over the elimination of terrorists in Batla House encounter. While the opposition is busy playing with the security of the nation, our government has created the National War Memorial and National Police Memorial and we respect every martyr”.

‘WE STRENGTHEN HANDS OF STREET VENDORS’

Addressing a huge rally in Unnao, the Prime Minister hit out at the Samajwadi Party. He said, “Even after getting defeated in the first two phases, whenever these people sleep, they watch dreams of coming into power. They were defeated in 2017; they will be defeated in 2022. People in UP will bring Yogi back.”

Slamming the Samajwadi Party President Akhilesh Yadav, PM Shri Narendra Modi said, “The seat that they (SP) were considering as the safest, is also getting out of their hands. You must have seen, the father, Mulayam Singh Yadav who was pushed from the stage, was humiliated to capture the party, had to plead to save his son’s seat. He further alleged that they have made such an image of UP that nothing can change here. Yogi government has shown improvement in law and order. UP will bring back Yogi Ji who brought security, development and growth in the state.
He said, “This is a double engine government which is supplying water to every household today. During the pandemic, we have made an effort to strengthen hands of street vendors. Loans have been sanctioned to about 8.5 lakh street vendors of Uttar Pradesh under PM SVANIDHI Yojana.”

For so many decades after independence, no one cared about small farmers. For the first time, the Double Engine Sarkar has placed small farmers at the centre of policy-making. PM Kisan Samman Yojana and pension scheme after 60 years is a big proof of this”.

Addressing an election rally in Fatehpur, Uttar Pradesh on February 17, 2022 to campaign for the BJP, Prime Minister Shri Narendra Modi said every phase of UP polls is voting for BJP. The people of Uttar Pradesh are determined to hold colourful celebrations of victory on 10th March, ahead of Holi.”

Slamming the opposition for creating vaccine hesitancy, PM Modi remarked, “‘Parivarwadi’ are calling COVID19 vaccines ‘BJP ka Teeka’. Two kinds of people are scared of the vaccine – one is corona virus and the other are those opposing the vaccines. These people have problem with Modi, Yogi and the vaccine.”

He said, “During my first address from the Red Fort as the Prime Minister, I spoke about building toilets for the women in the villages. The opponents mocked this noble cause as they could never understand the pain of poor mothers and sisters. These people even opposed banning of triple talaq. Should I not think of the welfare of women of the country? Parivarwadi’s are scared that their vote bank is vanishing as Modi is providing facilities like health schemes, houses, toilets etc. to the poor.”

‘PARIVAARWADI’ WILL AGAIN BE DEFEATED BY THE PEOPLE’

In Uttar Pradesh, PM Shri Narendra Modi’s rally spree continued as he addressed a huge election rally in Kanpur Dehat on February 14, 2022. The Prime Minister expressed his gratitude towards the people for their support and said, “Voting is going on and I would urge all the voters, especially the first-time voters, to come out to vote in maximum numbers.”

Addressing the huge rally, he said, “The ‘Parivaarwadi’ will again be defeated by the people of Uttar Pradesh. The festival of colours- Holi will be celebrated in Uttar Pradesh on 10th March itself.”

Targeting the opposition, The PM Shri Modi asked, “When they keep changing their allies, then how will they serve the people of Uttar Pradesh? Earlier governments looted the people of the state. People of UP have defeated them in 2014, then in 2017 and 2019, and now in 2022 again these staunch ‘Parivarwadis’ will lose.”