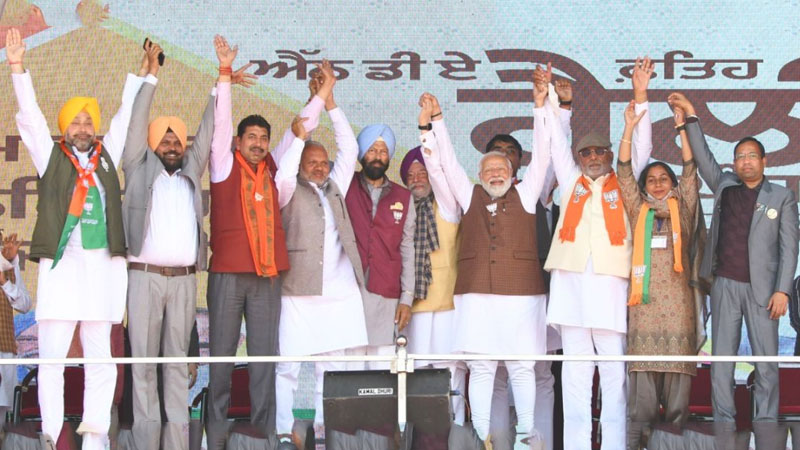 In the run-up to the Punjab assembly elections, PM Shri Narendra Modi addressed gigantic rallies in various places of the state. Addressing the huge rallies, he said, “Today Punjab needs a government that draws inspiration from patriotism, should be for the development of Punjab. BJP has come before you with dedication, with the resolve of security and development of Punjab.”

Continuing his election campaigning, PM Shri Narendra Modi addressed a rally in Punjab’s Fazilka on February 17, 2022. Talking about the benefits of BJP+ government, he asserted, “Double engine government in Punjab would mean development, bringing an end to sand and drug mafia, new energy in industrial units and employment opportunities for the youth.”

Highlighting the commitments fulfilled by his government for farmers’ welfare, Shri Modi reiterated, “Under PM Kisan Samman Nidhi, the central government has directly transferred more than Rs 3,700 crore to the bank accounts of farmers of Punjab. This has benefited more than 23 lakh farmers of Punjab.” The PM slammed the Congress party for always betraying farmers, he said, “There was long pending demand to implement recommendations of Swaminathan Commission. They sat on those files but kept lying. When we formed our Government at the Centre, we implemented those recommendations.”

He also spoke about several other central schemes – from Ayushman Bharat to Ujala Yojana, he stated, “Under the PM Awas Yojana of the central government, thousands of houses are being built in Punjab. Under the Ujala scheme, we also distributed lakhs of LED bulbs to reduce electricity bills in Punjab.”

‘Welfare of the poor is our top priority’

Speaking at a huge rally in Pathankot on February 16, 2022 PM Shri Narendra Modi said, “Today due to Corona in several big countries, the poor are facing all kinds of problems, there is a problem of food. But, despite the pandemic, India is giving free ration to crores of citizens including the poor of Punjab. We made all the efforts and ensured that no one was left hungry. Welfare of the poor is our government’s top priority.”

“I urge the people of Punjab to give us five years to work for you. Wherever BJP established itself, the remote-control family (Congress) from Delhi was wiped out. Wherever there is peace, appeasement has been given a farewell, the same farewell has to be given in Punjab also,” he said in Pathankot.