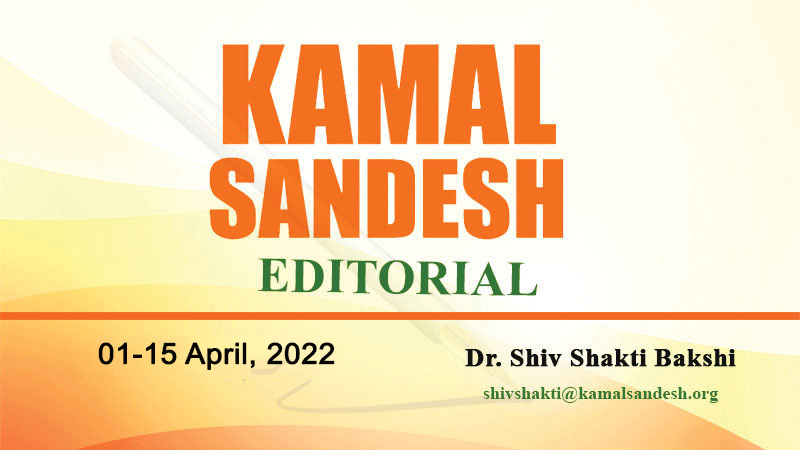 As indicated by the results of the recently held assembly elections, the people of India are increasingly voting in favour of politics of good governance, development and performance. The results in the four states where BJP has returned with a huge mandate also show that the politics in these states has now stabilised with BJP emerging as the people’s favourite choice on the strength of its commitment to fulfil the aspirations of the people. It is happening after decades of political instability when a single party rarely got a full majority in the elections and seldom returned to form the government again. A huge churning has taken place with the BJP not only getting a full majority in parliamentary elections in 2014 and becoming the only political party to get a full majority on its own in last three decades, but repeating its performance even more emphatically in 2019. The same process is now being replicated in many other states, with people supporting the BJP more and more in almost every election. It is the victory of the politics of commitment, service, and performance. It is the victory of the selfless work of millions of BJP karykartas across the country, dedicated leadership having the vision of ‘Nation First’ and the mantra of building an ‘Aatmnirbhar Bharat’.

While the political scene in the country is witnessing a transformation, the impact can be seen in almost every sector, including the economy, academics, media, and

As a confident India rises on the strength of its own and with the resolve to realise the dream of an ‘Aatmnirbhar Bharat’, a change with a rare kind of dynamism can be seen everywhere

cinema. The recently released Kashmir Files has become a new phenomenon in Indian cinema, proving that a true story, if told fearlessly, can sell without marketing, branding, or PR exercise. The manner in which the plight of Kashmiri Hindus has been portrayed and the genocide through which they had to undergo, resulting in their forced migration from the Kashmir valley, has once again shook the conscience of the entire nation. In fact, it’s the first time that a movie has been made about the untold miseries of Kashmiri Hindus, bringing the people face-to-face with the real situation that existed in the valley. The movie has also exposed a large section of Bollywood that has been making fictitious films on the Kashmir issue, rationalising terrorism in the valley and pushing the separatist agenda through their misleading narratives. These Bollywood filmmakers should now realise that such an approach has created a deep wedge among people in the valley, creating a sense of alienation while fuelling violence and separatism. At the same time, the makers of Kashmir Files should be saluted for their courage to tell the truth and stand by their conviction to rescue Bollywood from the dungeon of false narrative and fictitious themes. The people of India deserve to be congratulated for backing this movie wholeheartedly and for turning it into an all-time blockbuster.

As a confident India rises on the strength of its own and with the resolve to realise the dream of an ‘Aatmnirbhar Bharat’, a change with a rare kind of dynamism can be seen everywhere. An India that can face the COVID-19 pandemic for two long years without faltering even once while extending a helping hand to other countries is certainly a new phenomenon. An India that can manufacture vaccines, an India that can turn all challenges into opportunities by launching various reforms during a crisis, an India that can provide free rations to 800 million people, care for vulnerable sections of society during a pandemic, and provide free vaccines to all seems unfathomable to those who witnessed the UPA’s misrule just seven years ago.It has been possible under the dynamic and visionary leadership of Prime Minister Shri Narendra Modi, who has inspired millions of committed BJP karyakartas and selfless people across the country through his tireless efforts. The result is that a new India has emerged, which no longer languishes behind but completes the target before the appointed time. As India realises its inner strength, the goals of ‘Aatmnirbhar Bharat’ are now not difficult to achieve.