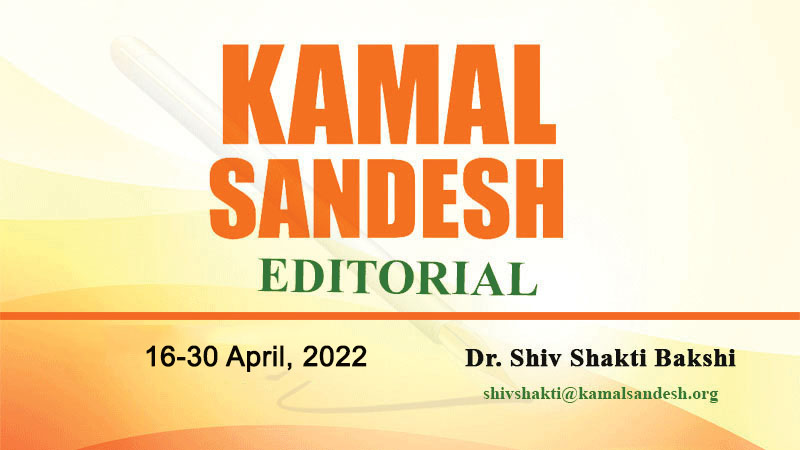 As millions of BJP karyakartas celebrated the 42nd foundation day of the party on April 6, 2022, the boundless enthusiasm was witnessed in several programmes organised across the nation. It became an occasion to redeem the pledge to serve the nation selflessly and rededicate to the higher ideals and principles on which the edifice of the BJP has been built over decades. The determination to build “Ek Bharat, Shreshtha Bahrat” while adhering to the guiding dictum of “Sabka Saath, Sabka Vikas, Sabka Vishwas, Sabka Prayas” exemplifies the commitment to the mantra of “Nation First, Party Next, and Self Last.”The BJP has not only emerged as a unique political party but has also transformed the politics of the country, presenting examples to be emulated by other countries as well. Its phenomenal rise on the strength of selfless karyakartas and committed leadership has proven beyond doubt that principled politics, uncompromising stands on various issues, and honest and hard work can do wonders in democracy.

The BJP is now not only the country’s only hope, but also a model for the rest of the world. It has not only grown to become the world’s largest political party, with over 18 crore members, but it has also evolved into a party that has practised internal democracy since its inception. It has a tradition of self-made leaders and karyakrtas who inspire confidence and trust among the people and assure them that the nation is safe and secure in their hands. Who can forget the heroic struggle of BJP (then Jansangh) karyakartas during the black days of the emergency? Whenever

The BJP is now not only the country’s only hope, but also a model for the rest of the world. It has not only grown to become the world’s largest political party, with over 18 crore members, but it has also evolved into a party that has practised internal democracy since its inception

democracy is threatened or the unity and integrity of the nation is questioned, the BJP karykartas are always in the forefront of safeguarding democracy and defending the unity and integrity of the nation. In fighting against corruption, misuse of political power and subversion of the constitution, the BJP has always taken a principled stand on every occasion. It has emerged as the sole party advocating reform at various levels to strengthen the political system in the interest of the people. As a political party drawing inspiration from India’s glorious past, the BJP is committed to building an India of the 21st century by building robust infrastructure, creating immense opportunities for the youth, and opening the doors of possibilities in every sector through futuristic policies and a visionary approach.

The immense faith of people in the BJP can be seen in the increasing support the party is getting election after election. The results of the recently held assembly elections point to the fact that the BJP governments have been able to win the hearts of the people wherever they have been given the opportunity to serve. The re-election of the BJP government in four states is not only historic but also indicates that the people’s faith has been increasing leaps and bounds with every passing day. The way they re-elected Modi’s government in 2019 after 2014 with an even bigger mandate is now being replicated in various states. The manner in which India, under the strong and visionary leadership of Prime Minister Shri Narendra Modi, met the challenges of the COVID-19 pandemic and created opportunities out of this global crisis has been acknowledged across the world. While the round-the-clock monitoring of the relief works and preventive measures by the Prime Minister saw ‘Made in India’ vaccines being developed in the country itself, the world’s largest relief programmes covering more than 80 crore people ensured that all vulnerable sections of the society were safeguarded, every poor person got a free ration and every citizen got free vaccines in the country. In addition to these huge achievements, the ‘Aatmnirbhar Bharat’ package and various reforms initiated during the pandemic are now yielding results, with India’s economy soaring high at unprecedented rates. As BJP karyakartas redeem their pledge under the leadership of Prime Minister Shri Narendra Modi and BJP National President Shri JP Nadda, India is set to scale new heights in the days to come.