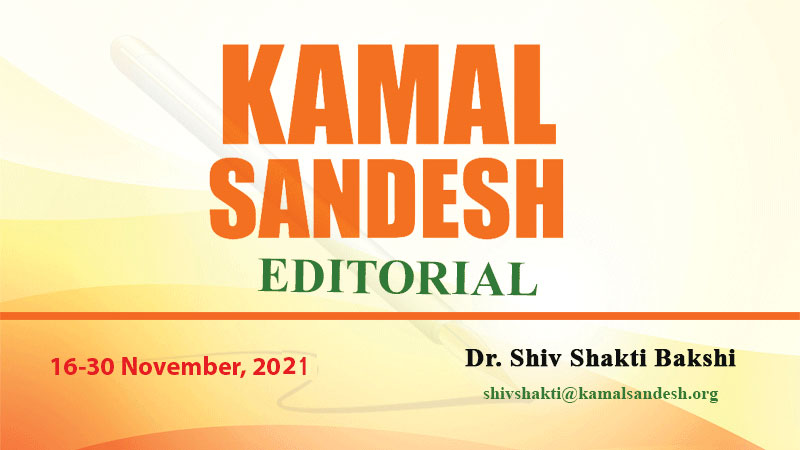 As Prime Minister Shri Narendra Modi emerges as the most popular world leader in yet another global survey, India has added another feather to its cap with the WHO approving ‘Made in India’ Covaxin. The WHO approval is not only an achievement for India but it also sends a message of hope to a large number of countries who are waiting for ‘Made in India’ vaccines to fight the Covid-19 pandemic on their own soil. Today, when India is preparing to produce more than five billion doses of Covid-19 vaccines in true spirit of ‘Vasudhaiv Kutumbakam’, many countries may now hope to strengthen their fight against the pandemic hoping to receive ‘Made in India’ vaccines in near future. The high approval rating of 70% for Prime Minister Shri Narendra Modi signifies the emergence of a ‘New India’ which is not only confident of itself but eager to reach out to other countries in their time of need.

The world is witnessing a ‘New and Self-reliant India’ emerging under the visionary and dynamic leadership of Prime Minister Shri Narendra Modi which is not only aware of its own responsibilities but keen to play a leading role on global issues. The recent visit of the Prime Minister to European countries in the wake of G20 and COP26 conferences has further enhanced India’s image as a nation committed to various issues concerning the people across globe. It is to be noted that India has been on the forefront on the issue of terrorism, international connectivity and taxation, climate change, reforms in UN institutions and world peace. In the time of Covid-19 pandemic, India not only helped more than 150 countries by supplying medicines but also emerged as the ‘Pharmacy of the World’ by supplying ‘Made in India’ vaccines, medical equipments, oxygen, expertise and other relief materials to the needy countries. India’s sense of responsibility towards global issues may be gauged from the fact that it has performed stunningly well on climate issues and its commitments are reflected on Climate Change Performance Index (CCPI) wherein it has retained tenth position for third year in a row while other major economies have floundered on the scale. The Prime Minister’s initiative on ‘International Solar Alliance’ and focus on renewable energy with commitment to net zero emissions further enhances India’s reputation as a major country which delivers on its commitments.

While PM’s recent visits to US and Europe has further enhanced India’s image worldwide, the BJP National Executive Meeting held in the national capital Delhi has strengthened the commitment of BJP karykartas to serve the nation with renewed vigour and dynamism. BJP National President Shri Jagat Prakash Nadda in his presidential address has expressed the political will to form governments in the states where people are still looking forward for BJP governments to fulfil their aspirations. As BJP governments from centre to states have been shining in the glory of enormous achievements, the BJP has become the largest political party in the world today. The goal of forming booth committees in all the booths of the country and strengthening the organization further with ‘panna pramukhs’ may enable the party to come up to the expectation of the people in the days to come. The announcement of the programme ‘Ab Har Ghar Dastak’ on the call of the Prime Minister will help in getting India fully vaccinated at the earliest.

The ‘Seva hi Sangathan’ programme under the inspiration of Prime Minsiter Shri Narendra Modi and in the guidance of BJP National President Shri Jagat Prakash Nadda has inspired millions of BJP karykartas to dedicate themselves in the service of the people even during the Covid-19 pandemic. In his address to the BJP NEC, the Prime Minister has further emphasised that the BJP karykartas should continue to have connect with the people at the ground with their resolve to serve them. The zeal to serve has made BJP a party of the common men.
shivshaktibakshi@kamalsandesh.org