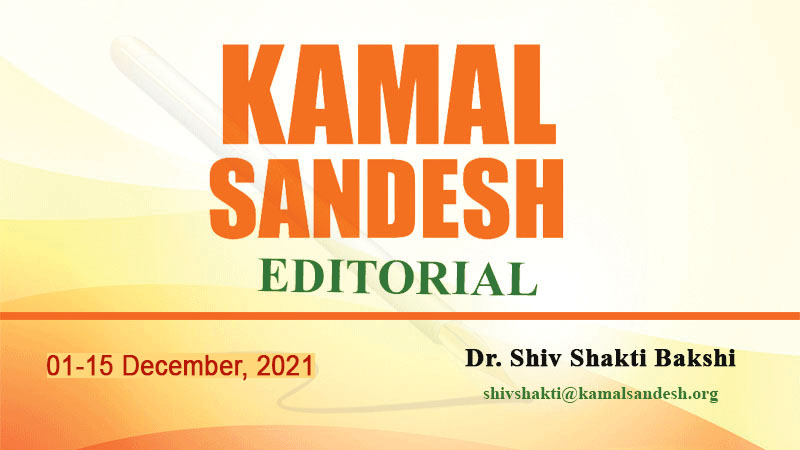 The decision to repeal the three farm laws on the ‘Prakash Parv’ of Guru Nanak Dev has once again brought an amazingly humane, democratic, credible and trustworthy face of Prime Minister Shri Narendra Modi before the nation. The decision, which may be seen from various angles with his detractors interpreting it with their own ‘politics’ in mind, has in fact enhanced his stature as the tallest leader who rises on occasions to break any deadlock with his human touch. As a leader who listens, cares and empowers the weakest among the weak and maintains restraint even in the face of extreme provocation, he has become the “Pradhan Sevak” for the country in real sense, keeping the interests of the nation at the highest pedestal. On several occasions he has exemplified the best in practicing the dictum of ‘Nation first, Party next and Self last’.

These reforms were discussed for long in the country as various farmer leaders, experts, agricultural scientists, economists and different political parties have been advocating these steps on various forums from time to time to protect the interests of the small and marginal farmers. It was the reason that many among those who opposed these reforms later, in fact initially not only demanded them but backed them in parliament and welcomed them when these bills were passed. The goal was clear right from the beginning – to give huge impetus to the agriculture sector aimed at improving the lives of the farmers, villages, poor and rural life. The kind of unreasonable and intransigent approach shown by a section of farmer leaders cannot absolve the Congress led opposition from the charges of playing murky politics on the issue of these crucial reforms and from acting against the interests of small and marginal farmers.

Contrary to the Congress-Communist model of democracy wherein people are seen as ‘ruled’ by the ruling dispensation, opposition is brutalised, protests are crushed with an iron hand and dissenting voices are strangled, emergency is imposed and protestors are fired upon, Prime Minister Shri Narendra Modi has brought in a model of democracy based upon respecting the dissenting voices and opposition, accommodating them in larger national interests, listening to them while practising extreme form of restraint and tolerance. Under his leadership the nation is now witnessing cooperative federalism wherein state governments ruled by opposition get helping hand from the Prime Minister and gets support and cooperation for the welfare of the people while the Prime Minister considers it his democratic duty to respond to even a small section of farmers by announcing repeal of farm laws and that too when he enjoys an unassailable and massive mandate of the entire country. The manner in which long road blockades and Lal Quila incident on Republic Day were handled speaks volumes of the Prime Minister’s exceptional faith in democratic values of restraint and tolerance.

As a selfless leader committed to the cause of poor, downtrodden, oppressed and deprived, the Prime Minister has created a new paradigm of politics entailing unparalleled service, complete dedication and extraordinary sense of duty which was witnessed during his remarkable handling of Covid-19 pandemic and in achieving the target of 100 crore vaccination in record time. It has won him millions of hearts across the nation as a result of his unquestionable commitment to national interests, unflinching faith in democratic culture, its principles and spirit. Today, when the Prime Minister has announced the formation of a broad based committee to look into new aspects of agricultural issues like promoting zero-budget based agriculture, change in cropping pattern as per changing needs of the country and to make MSP more effective and transparent, the nation commits itself to march ahead on the path of continuously working for the welfare of farmers, poor and villages.