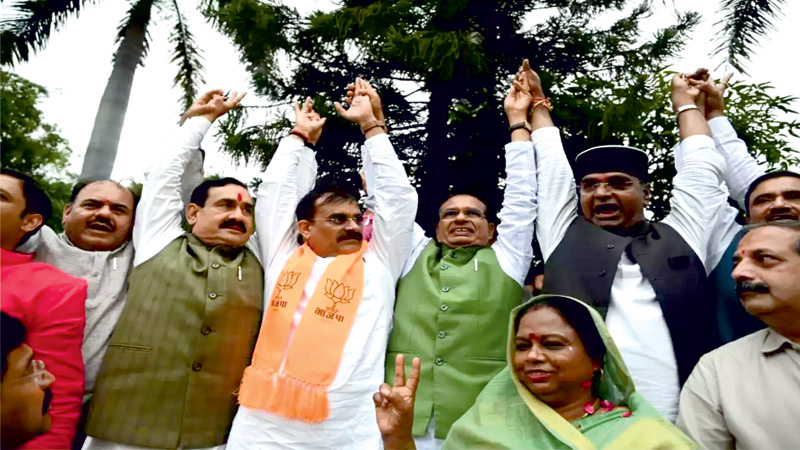 The Bharatiya Janata Party has emerged victorious on 231 of a total 255 local bodies in the Municipal Elections of Madhya Pradesh. In these BJP won 65 Municipalities out of 76 and won 9 Mayoral posts.

According to the results of the first phase of polling which was held on 6 July, BJP won 7 Mayoral seats and in the second phase BJP won two seats. Out of the total 16 Corporations in the state, the BJP won nine and Congress five seats respectively. One seat went to AAP and another to Independent.

Congratulating the MP BJP workers PM Shri Narendra Modi in a tweet said, “Many thanks to all voters for reposing their faith in BJP in Madhya Pradesh Municipal Elections. This victory is a symbol of the unwavering faith of the people in the @ChouhanShivraj government of the state. Many congratulations to the party workers as well as all the winning candidates”.

While BJP National President Shri Jagat Prakash Nadda said, “Congratulations to Shri @ChouhanShivraj ji, Shri @vdsharmabjp ji and all the workers of @BJP4MP for the grand victory of BJP in the Madhya Pradesh Municipal Elections! This victory is the result of people trust in the public welfare policies of the state government under the guidance of respected Prime Minister Shri @narendramodi ji”.

Madhya Pradesh Chief Minister Shri Shivraj Singh Chouhan termed the Bharatiya Janata Party’s performance in the local body polls in the state as historic, saying that people from urban and rural areas voted in favour of the ruling party. He said the party has won around 90 per cent seats in the Nagar Panchayat and Nagar Parishad polls and also performed very well in the Municipal Corporations as well.