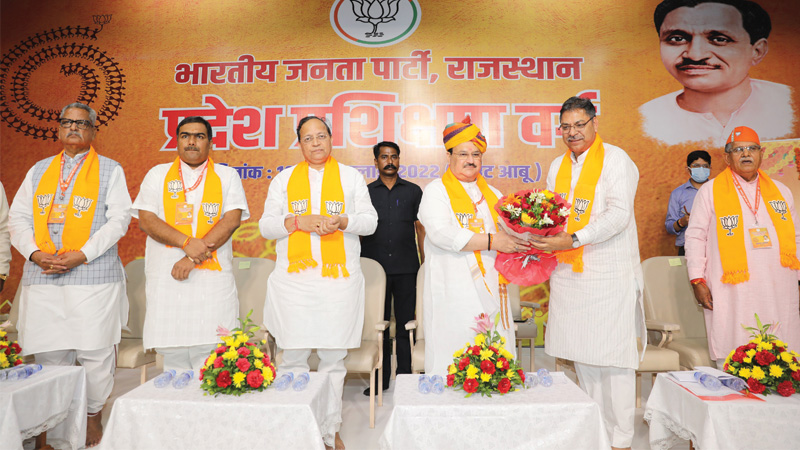 Ahead of the Assembly elections scheduled for next year, a three-day training camp of BJP Karyakartas was held at Mount Abu in Rajasthan on 11 July, 2022. Expressing confidence, Bharatiya Janata Party National President Shri JP Nadda said that the guidance received from Mount Abu should be taken with positive energy to the karyakartas at the grassroots level, which will be instrumental in achieving ‘Vijay Sankalp’ of Mission 2023. Shri Nadda expressed this confidence in his address at the conclusion of the three-day Training Varg.

Further speaking to the karyakartas Shri Nadda said there have been different sessions held during this training. In which politics, organizational, Booth-Mandal empowerment, public welfare schemes of the Modi government, foreign policy, failure of the Congress government of the state etc. were discussed.

Shri Nadda said that he has full hope and belief that the knowledge and guidance received from Mount Abu, the holy place of Maa Arbuda Devi and Gyan Sarovar, will carry positive energy to the karyakartas at the grassroots level and BJP will come in Rajasthan with a thumping majority next year. He said that training Varg is a continuous process of the party, it is an important factor in shaping our karyakartas. Except BJP, there is no such party in the country which organizes such systematic and disciplined training for its workers.

The BJP National President said our party does not have a culture of ruling, we all work like volunteers. Through the hard work of the karyakartas, we get respect, so the workers are our strength.

Shri Nadda said that BJP being a national party works for local aspirations while securing the national interests. He urged that a dialogue process should be maintained between public representatives and common men, and efforts should be made to solve their problems by listening to them. He said BJP is the only national party in India, the rest of the parties have been reduced to parivarvad, dynasty and individualism politics.

He said instead of worrying about what we got in the party, we should think about what we have given to the country and what we have given to the party. BJP is the only party that gives priority to Nation First. Our resolve should be that the country and the party will benefit only then we will progress in life as an individual. Whatever be the work, it should be completed on time.