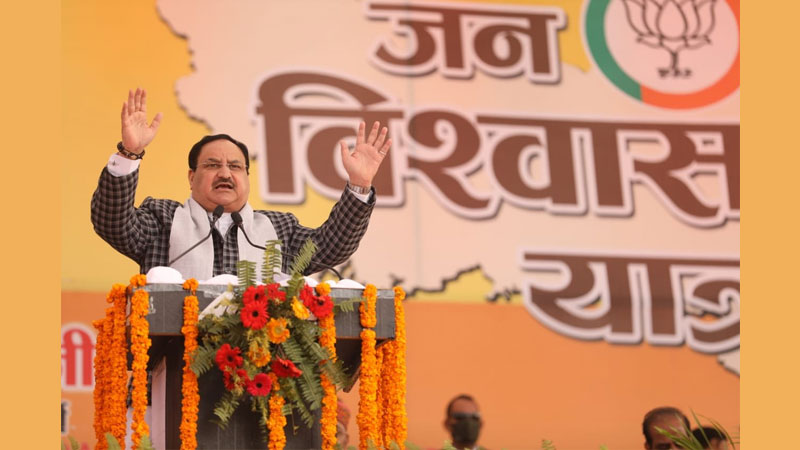 Bharatiya Janata Party National President Shri Jagat Prakash Nadda flagged off the massive ‘Jan Vishwas Yatra’ at Ambedkar Nagar in Uttar Pradesh on 19 December, 2021. The Yatra will cover all the 403 assembly constituencies in the state covering all the districts and directly connecting with maximum people across Uttar Pradesh. The ‘Jan Vishwas Yatra’ simultaneously launched by different senior leaders of the party from six locations that are Ambedkar Nagar, Mathura, Bijnor, Jhansi, Balia and Ghazipur. 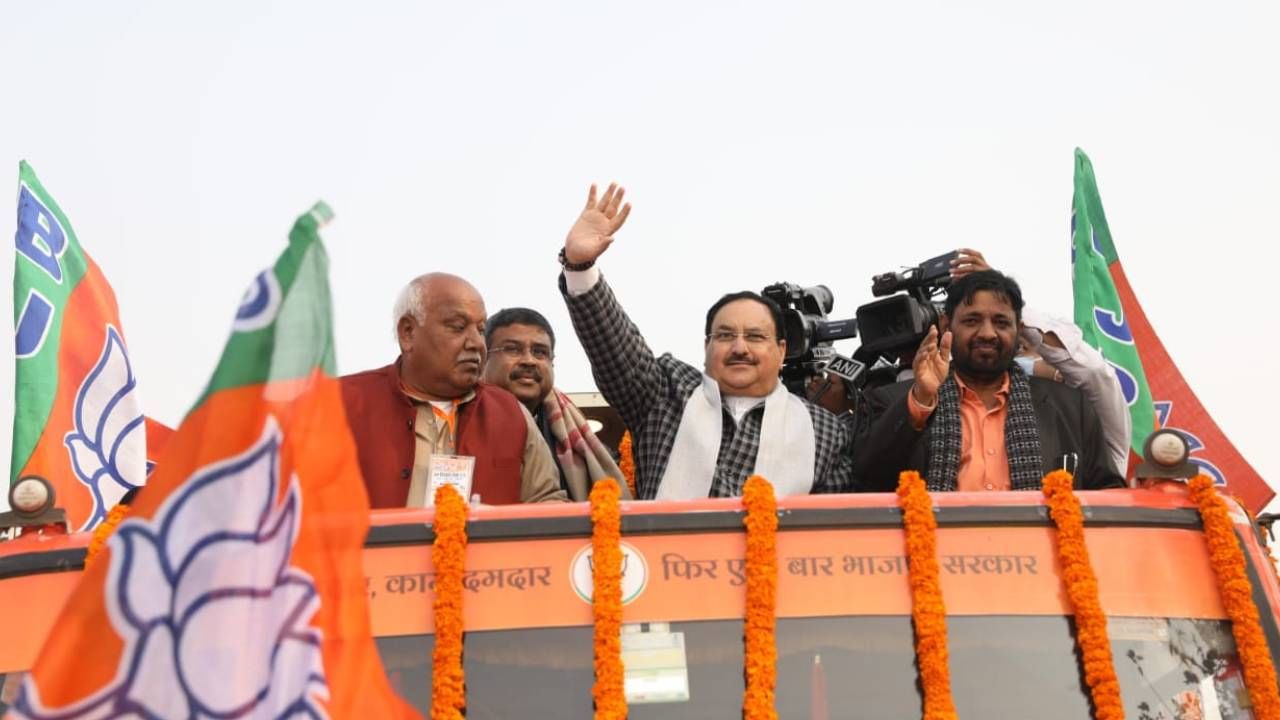 Addressing the ‘Jan Vishwas Yatra’ at Ambedkar Nagar, BJP National President Shri Jagat Prakash Nadda said, it is the double engine government of the Bharatiya Janata Party under the leadership and guidance of Prime Minister Shri Narendra Modi which has given respect and honour to the people. It has ensured development and growth, it has ensured law and order in the state and has empowered women and girls, and it has worked for all the sections of the society. The people of Uttar Pradesh cannot expect such development, growth and rule of law from the opposition parties as they do not have any vision, plan or mentality.

KEY POINTS OF SPEECH
YOGI GOVT. CRACKED DOWN ON THE MAFIA

• The Samajwadi Party and corruption and crime are two faces of the same coin. The people of Uttar Pradesh have not forgotten the massive corruption in Gomti riverfront development and utilization certificate committed by the Samajwadi Party government.
• The Akhilesh Yadav government also did massive corruption in distribution of laptops. So, it is very clear that it is the same old Samajwadi Party, and it has nothing new to offer to the people of Uttar Pradesh.
• The kind of absurd and senseless comments and arguments the Samajwadi Party leaders are giving on the proposal to revise the legal marriage age of girls from 18 years to 21 years just shows their sick mentality and it also shows their respect and honour for women. Such acts of the Samajwadi Party and its leaders are highly condemnable and deplorable. And what is more disgusting and shameful is the open support the Samajwadi Party leader Akhilesh Yadav is lending to his party leaders.
• All the development policies and programmes implemented by PM Shri Narendra Modi and our state governments are for the welfare and upliftment of all sections and communities in our society – be it the Ayushman Bharat Yojna, the Jan Dhan Yojna, the Kisan Samman Nidhi Yojna, the Ujjawala Yojna, the Saubhagya Yojana. The programmes and policies are for the poor, the backward classes, the Dalits, the minorities, the oppressed classes and all the needy people of our country.

• The double engine government of the Bharatiya Janata Party under the guidance of Prime Minister Shri Narendra Modi and leadership of Chief Minister Shri Yogi Adityanath has changed the face and fortune of Uttar Pradesh. Today, Uttar Pradesh is developing fast in all sectors and has excelled in all parameters of socio – economic development. Today, change is very clearly visible in Uttar Pradesh due to the true efforts of the Bharatiya Janata Party government.

Addressing the huge gathering at the ‘Jan Vishwas Yatra’ in Jhansi on 19 October 2021, Union Minister Shri Rajnath Singh said the land of Maharaja Chhatrasal and Rani Laxmi Bai is the place of worship for all of us. He said, “I salute the land of Bundelkhand with folded hands, who gave birth to such brave heroes who changed the history of the country.

Shri Singh said under the dynamic leadership of Prime Minister Shri Narendra Modi, the BJP government is also developing and maintaining India’s heritage and reviving the glorious past. Somnath temple has been given a grand appearance during the turn of Shri Narendra Modi. The foundation stone of a grand temple of Shri Rama has been laid in Ayodhya. Work has also been done to restore the glory of Kashi Vishwanath Dham.

He said in Uttar Pradesh, under the leadership of Chief Minister Yogi Adityanath the law and order was comprehensively improved. The heartbeat of goons and miscreants increases as soon as they hear the name of Yogi Adityanathji.
Shri Rajnath Singh said what is SP, what BSP is and what Congress is. Whatever they may be but on the pitch of Uttar Pradesh, they will not be able to survive in front of Yogiji’s bowling.

JAN VISHWAS YATRA, BIJNOR
5 YEARS THAT YOU SAW WAS A TRAILER THE REAL FILM IS YET TO START: NITIN GADKARI

Union Minister Shri Nitin Gadkari launched the ‘Jan Vishwas Yatra’ in Chandpur in Bijnor district, Uttar Pradesh on 19 December, 2021. Addressing the public rally Union Road Transport Minister praised the Yogi Adityanath government in Uttar Pradesh saying it was just a trailer and the real film was yet to come.
Shri Gadkari said, “We are not just ending hooliganism in Uttar Pradesh, we are also going to end poverty, hunger and unemployment. The five years that you saw was a trailer. The real film is yet to start.

He asked the public to give chance once again to the double engine government of the BJP in the state and sit in peace and see how miracles will happen.

After flagging up the ‘Jan Vishwas Yatra’ in Ballia, Uttar Pradesh, Madhya Pradesh Chief Minister Shri Shivraj Singh Chouhan said the unprecedented love and support we have received in today’s Yatra has convinced me that BJP will win with a thumping majority in Uttar Pradesh.

He said faith is the basis of love and BJP will not allow this love, trust of yours to be broken. By fulfilling the dream of all-round development of Uttar Pradesh the BJP government will fulfill the resolution to make your life simple and pleasant.
Shri Chouhan said the double engine government of Modi + YOGI means all round development and prosperity of the farmers and poor of UP, end the rule of goonda, mafia and ban on conversion.

JAN VISHWAS YATRA, MATHURA
BJP IS GOING AMONGST THE PUBLIC ONCE AGAIN TO TAKE THEIR BLESSINGS: YOGI ADITYANATH

Addressing a huge gathering on the launch of ‘Jan Vishwas Yatra’ in Mathura, Uttar Pradesh Chief Minister Yogi Adityanath said, “During the past four and a half years, under the leadership of PM Shri Narendra Modi, the BJP government has worked towards the infrastructure development, women security, law and order, the benefit of farmers and poor of the state.

He said with our ‘Jan Vishwas Yatra’, we are going amongst the public once again, to take their blessings.

He said, “I have got the opportunity to kick start the Yatra from the holy city of Mathura. We stood on the expectations of the people.”

Uttar Pradesh is slated to go to Assembly polls early next year. In the 2017 Assembly elections in Uttar Pradesh, the Bharatiya Janata Party bagged a massive mandate with 312 seats out of the 403-seat in Uttar Pradesh Assembly while Samajwadi Party bagged 47 seats, Bahujan Samaj Party won 19 and Congress could manage to win only seven seats. The rest of the seats were bagged by other candidates.

Union Minister Smt Smriti Irani addressing a public meeting at Lanka ground in Ghazipur while flagging off the Jan Vishwas Yatra, said that the mafia’s empire was bulldozed in UP because the steering of the government was in the hands of the people.
Smt. Irani slammed the Samajwadi party, accusing it of patronizing criminals and mafia, and said watching the state government bulldoze the illegal buildings and economic empire of the mafia was very painful for the opposition party.