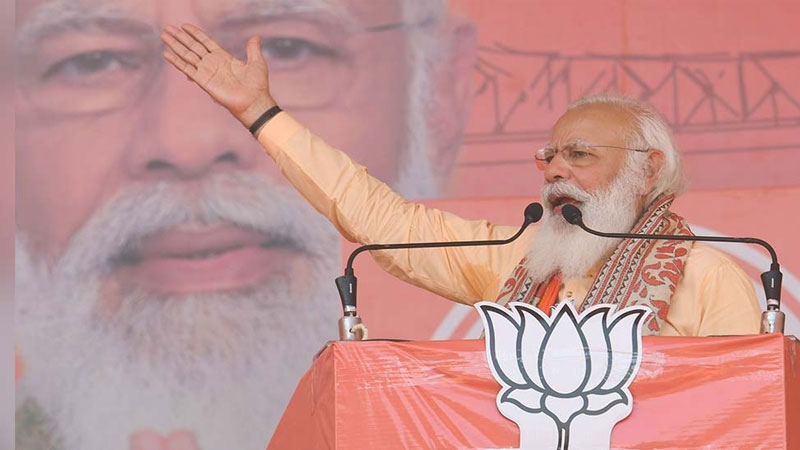 PM’S CAMPAIGNS AT JAYNAGAR AND ULUBERIA IN WEST BENGAL

PM Shri Narendra Modi addressed mammoth public meetings at Jaynagar and Uluberia on April 01, 2021 in West Bengal. Speaking at Jaynagar, Shri Narendra Modi said, “I can witness the wave of ‘Ashol Poribortan’ being sped up by this region. In the record-breaking turnout in the first phase, people have given massive support to the BJP. PM Shri Modi also paid tribute to late Shova Majumdar.

“Some weeks ago, people of Bengal were saying that BJP will get more than 200 seats. BJP’s strong start in the first phase makes it clear that the voices of people have received God’s blessing. Everywhere, there is only BJP. There is a BJP wave in Bengal,” said the PM while addressing a public rally in Jaynagar.

The mood of polling says what the whole West Bengal wanted to do, Nandigram is doing it alone. Didi’s frustration has increased after first phase of voting. Yesterday, Didi asked for help with many politicians, from those she never gave time or met, she is asking for support from them now,” he said.

Lashing out at Mamata Banerjee on insulting the rich culture and tradition of Bengal, PM stated, “Mamata didi has problem with slogans of ‘Jai Shri Ram’, she also had a problem with immersion of Durga idols, Bengal knows about these. Now didi has problem with ‘tilak’ and saffron clothes. Didi’s people are now calling people with ‘chotis’ as ‘rakshas’.”

“We are always proud of our religious sentiments. Didi has forgotten the people of Bengal only to support and appease infiltrators. But I will not let you abuse people’s devotion and the identity of Ram Krishna Paramhans, Chaitanya Mahaprabhu, and Swami Vivekananda,” he added.