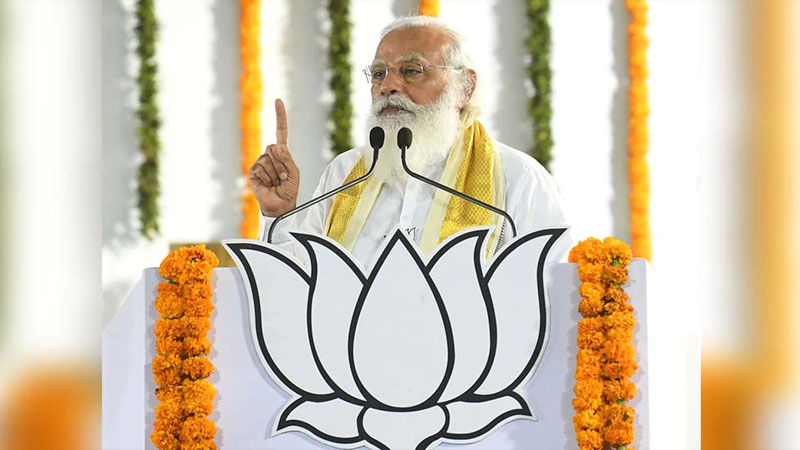 Ahead of Kerala assembly polls, Prime Minister Shri Narendra Modi addressed a huge rally in Thiruvananthapuram on April 02, 2021. He said, “There are times in the history of societies when the people speak in one voice against tyranny, mis-governance and oppression. These are special epoch-making moments in which the people convey a very clear message to those in power.”

The Prime Minister said, “The capital of Kerala has a special link with BJP. Our first ever seat in the Kerala Assembly came from this part of the state.

In a fresh attack on opposition parties in Kerala, Shri Modi said, “In Kerala the people of the state are convinced on two things. First- UDF and LDF are twins. They are twins of mis-governance, corruption, political violence, communalism, casteism, cronyism, nepotism and more. The political picture in West Bengal is clear to everyone. Election after election, Congress and Left are getting closer. The logical step after such closeness is a full merger of Congress and Left. They can call the new party – CCP – ‘Congress-Comrade Party’.

“Second – Because they are twins, UDF lacks the ability and willingness to defeat LDF. No wonder there is a surge of support in favour of NDA,” he added.
Shri Modi said that Congress is such a shameless party that they will sacrifice any hardworking person at the altar of factional politics. “Many years ago- in the battle between the ‘I’ faction and ‘A’ faction, the career of a patriotic scientist Nambi Narayanan was destroyed. That is why, even though they do try, not many professionals relate with UDF. In the NDA, see the place of pride Metro Man Sridharan has got. Today, he is emerging as an inspiration for so many professionals,” he shared.

Launching an all-out attack on the current Kerala Government, the Prime Minister asserted, “Under LDF, there is a total Hartal on governance in Kerala. The people of Kerala are talented and hard working. But, the LDF Government has failed to show any forward looking vision to solve their problems.”

“When our government was formed in 2014, only 5 cities had metro services. Today 18 cities have metro rail service. Also, I am aware that cyclones and floods have caused much damage and destruction across Kerala. Our Government is creating a strong disaster management system,” he said.