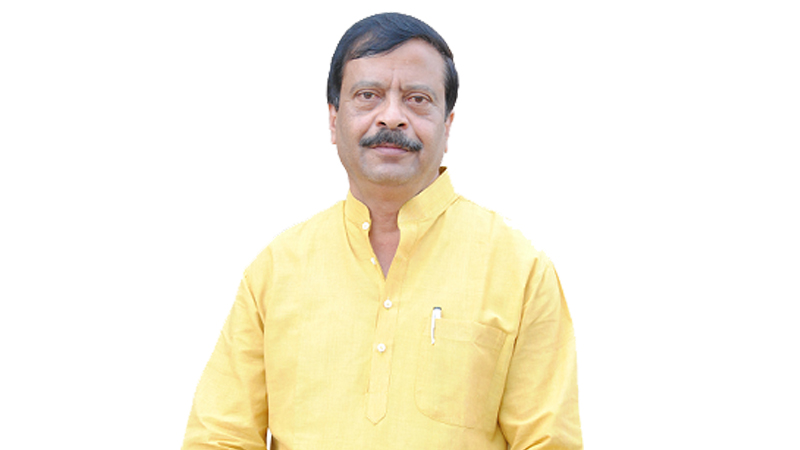 The newly elected Member of Parliament from Bargarh, Odisha Shri Suresh Pujari who is known for his frankness and sensibility represents the youth leadership of BJP. Starting his political career as a youth leader he held several important positions in Odisha BJP as State Vice-President (2000), State General Secretary (2004) and Odisha Party President (2006) before assuming the responsibility of BJP National Secretary since 2015 till date and the Sah-Prabhari of the party in West Bengal.

As West Bengal is getting exasperated under the burden of Mamata Banerjee led TMC’s misrule, Shri Pujari has divulged in an exclusive interview with the Associate Editor of Kamal Sandesh Ram Prasad Tripathy, the main reasons behind this majestic feat of BJP in the 2019 Lok Sabha elections and the future strategy of the party for the next Assembly elections of the state.

Shri Pujari also revealed how BJP is planning to uproot the TMC from West Bengal and will bring the state out of the vicious cycle of violence, crime and chaos and rekindle the glorious past which has eluded the state in the past four decades. Excerpts;

At the outset let me congratulate you on being elected as the Member of Parliament from Bargarh constituency of Odisha. The BJP has also performed well in Odisha and increased its Lok Sabha seats from one to eight. But in the neighbouring West Bengal, where you are the co-in charge of the party, from just two Lok Sabha seats in 2014, to winning 18 Lok Sabha seats this time and decimating the ruling TMC in its own citadel was really a stunning performance of the BJP. What are the main reasons behind this majestic feat?

First of all, let me thank you for your warm wishes. I am also grateful to the electorate of Bargarh, the people of my state, party elders and the altruistic Karyakartas of BJP, for whom my victory and my party’s impressive win in Odisha was possible.

So far as West Bengal is concerned, you have rightly pointed out that from a victory in just two Lok Sabha seats in the last 2014 general election, to winning 18 Lok Sabha seats with massive margins and trouncing the Mamata Banerjee led TMC in its own bastions is a spectacular performance by the BJP.

Numerous reasons are there behind this accomplishment of the party. First of all, the grass root workers of BJP in West Bengal worked really heard since last many years to dethrone the autocratic TMC government from the state. Therefore, unquestionably the main credit of this massive win goes to these selfless Karyakartas of the party.

Secondly, hundreds of our Karyakartas sacrificed their life and got severe injuries during the last panchayat elections and afterwards resisting against

the TMC sponsored violence and terrorism. Resisting the violence even our senior leaders and ministers were wounded. In 2015 even I was severely injured for the violent attack of TMC goons. But courageously we faced these repressive measures of CM Mamata Banerjee throughout our struggle.

Third, the minority appeasement policies of the TMC government in Bengal, hurting the sentiments of Hindus intentionally, creating problems for Saraswati Puja, Kali Puja and Ramnavami celebrations across the state, deliberately creating obstacles for Hindu processions and encouraging the infiltration of Rohingya refugees and Bangladeshis have created a feeling amongst the people that the ‘Kashmirikaran’ of Bengal is going on by TMC and for these developments the electorate have made-up their mind from the onset of this election to vote Modiji and to form a strong BJP government at the centre.

Last but not the least, the hard and focused effort of PM Shri Narendra Modi ji and Margdarshan of party National President Shri Amit Shah ji, the hard labour of BJP National Jt. General Secretary (Org.) Shri Shiv Prakash ji, BJP National General Secretary and West Bengal BJP in-charge Shri Kailash Vijayvargiya ji and all office bearers of State BJP and the outstanding performance in the last five years of Modi government at the centre have played a pivotal role for this grand performance of the party.

With which core issues the BJP has reached out to the people in Bengal this time?

Principally the 2019 Lok Sabha election rotates around the magnetism and charm of our Prime Minister Shri Narendra Modi ji and his good governance, development and pro poor welfare schemes.

Shri Narendra Modi’s immaculate track record, corruption free governance, his pledge towards the nation, his dedication towards his work, his vision for a ‘New India’, ‘Sabka Saath Sabka Vikas‘ and his commitment for keeping the country safe from the clutches of the anti-nationals has won over the hearts of every Indian.
The popular schemes of the BJP government like providing LPG connection to BPL families under Ujjwala Yojana, providing sanitation under Swachhata mission, Jan Dhan bank accounts, providing best health care facilities to the poor under Ayushman Bharat, providing housing for all by 2022, providing electricity to the last village of the country, network of rural roads in the nook and corner of the country, strengthening the defense sector and a robust economy etc. have been some of the major talking points and issues which dominated the discourse throughout the course of Lok Sabha elections.

Once upon a time Bengal was known for spearheading cultural and intellectual revolutions that inspired the nation. However, the scenario has completely reversed in past some decades. What factors do you think are responsible for the overall decline of Bengal?

Sadly, I have to agree. Bengal produced some of the greatest human beings of our society like Sri Chaitanya, Ramakrishna, Vivekananda, Sri Aurobindo, Ravindranath Tagore, Subhash Bose, Dr. Shyama Prasad Mookerjee and many more freedom fighters, social reformers, scientists and Nobel laureates. During the pre-independence period Bengal was the epicenter of the freedom movement and was a major hub for industry and education. However, the decline of the state began with the entry of Left parties to power. In around four decades of Left rule, instead of development and corruption, crime ruled the state.

After the destructive Left rule, power passed to the hands of the TMC. All were hopeful that Under Mamata Banerjee West Bengal will regain its glory and can emerge as a developed state. But regrettably, Mamata Banerjee betrayed Bengal. The Left definitely ruined West Bengal but the TMC Government has taken the State to the point of no return.

Mamata Banerjee came with the slogan of ‘Parivartan’, but ‘Parivartan’ has not happened anywhere in the state. Many sectors collapsed, job has dried up and finally people are forced to migrate from the state.

Now, the CM is trying to choke the throat of democracy even for genuine opposition. Even shouting ‘Jai Shri Rama’ is unbearable for Mamata Banerjee and her leaders. The standard of language and behaviour of the CM stoops so low, it is the talking point at this moment all over the country. Currently under this dispensation Bengal is passing

through a terrible phase of turmoil and there is lot of degeneration in the political culture of the state. Now the common people very much understand this development that Bengal is rapidly deteriorating and it is on the verge of collapse.

As a responsible political party and a major force in West Bengal how BJP will bring the state out of this vicious cycle of violence, crime, chaos and decline.
Post 2019 general elections BJP has emerged as a major force in West Bengal with 18 Lok Sabha seats with more than 40% vote share and Mamata Banerjee is getting scared to see the phenomenal rise of the party. That’s why she is instructing her workers to physically attack our leaders, Karyakartas and political activists.
However, violence, crime and anti social forces have no future in a democratic setup.
Our leadership of Hon’ble Prime Minister Shri Narendra Modi ji and BJP National President Shri Amit Shah ji always believe in constructive politics, ‘Sabka Saath, Sabka Vikas’ and they believe that development is the only solution for all problems. Therefore, for us development is the only solution for all the problems at present Bengal is facing.

I believe, in a democracy the public has the last say. They have given fitting reply to this lawlessness and anti-democratic rule of Mamata Banerjee this time and note it down; in the upcoming assembly elections the people of Bengal will through the entire TMC in the Bay of Bengal and will bring the BJP government at the helm of affairs in the state.

The day is not far when BJP will bring the state out of the vicious cycle of violence, crime and chaos and rekindle the glorious past of Bengal which has eluded the state in the past four decades.

What is the strategy of BJP for its future expansion in West Bengal?

The present performance of the party is just a tip of the iceberg. It reveals the future of BJP is very bright in West Bengal. Common people know it very well that their Prime Minister Shri Narendra Modi is working round the clock, for their development. For that the popularity of BJP is automatically multiplying day by day in the state.

This time we won 18 seats with huge margins and lost some of the seats with a very thin margin. As per the Lok Sabha results BJP was ahead in 149 Assembly segments of the state. However, our focus is to get all the 40 Lok Sabha seats of the state in the next general election and to establish the BJP government in Bengal. We will do our best to achieve it.

Secondly, in Bengal, people are realising that BJP is the only party which can bring development without any discrimination. If BJP forms the Government in the state it can take the state to new highs. That is our asset.

Thirdly, we will fight further to save Bengal from the clutches of the criminals; we will fight to bring the past glory of the state back, we will fight to stop the ‘kashmirikaran’ of the Bengal and we will work till the grass roots level to strengthen the party organisation.

With its words and action, the TMC is spreading ‘Kichhad’ which will create a favorable climate for the lotus to bloom in Bengal. Therefore, I can foresee the bright future of the state and my party and I am confident that BJP will definitely form the next government in Bengal.