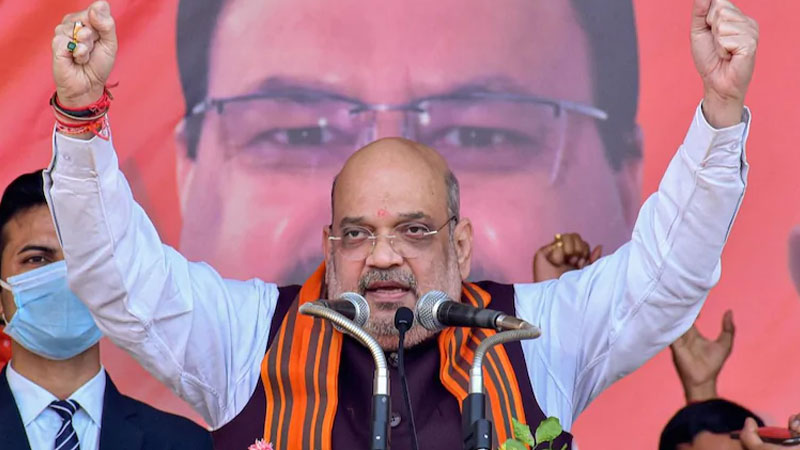 Ahead of the fourth phase of polling scheduled for 7 April, 2021 Union Home Minister Shri Amit Shah conducted a huge road show in Singur and Domjur of West Bengal. Singur was once a hot spot of the anti-land acquisition movement. The roadshow meandered through the roads of Singur town from Dulepara more to Singur police station, as colorful posters, BJP flags and green and saffron balloons dotted the route.

Cheered by crowds and supporters, Shri Shah stood atop a decorated vehicle with BJP candidate for the Singur seat Rabindranath Bhattacharya, waved at people standing by the roadside and on terraces and balconies.

The Home Minister said the obstructionist mindset of Chief Minister Mamata Banerjee deprived West Bengal of industries and jobs. He promised rapid industrialization of the area if BJP is voted to power.

Speaking to reporters during the show, Shri Shah said Singur will be developed by the next BJP government in the state. “We will develop the area by setting up industries and Rs 500 crore intervention fund has been announced for potatoes, for which the area is known, in our ‘Sankalp Patra’, he added.”

The BJP government will ensure that small, medium and large industries are set up in Singur, situated beside the national highway connecting Kolkata and New Delhi, after winning the elections, he said, adding “We will pursue politics of development, dialogue and cooperation, instead of confrontation.”

Shri Amit Shah also welcomed Mamata Banerjee for invoking Hindu Gods and Goddesses, and for reciting ‘Chandi Path’ at public meetings, but quipped it was too late for her. He said, “The BJP will win Bengal elections with more than 200 seats in the kitty.”

Union Home Minister Shri Amit Shah also had lunch at the house of Shri Shishir Sana’s home in Domjur on April 6, 2021. He had a simple fare of Rice, Dal, Vegetables and salad made by the womenfolk of the house, during his campaign.
The BJP candidate for the constituency Rajib Banerjee was also present also along with Shri Amit Shah. After having his meal, Shri Shah said, “I visited only one gram Panchayat but with the enthusiasm I saw, I am confident that BJP will win with a majority.”