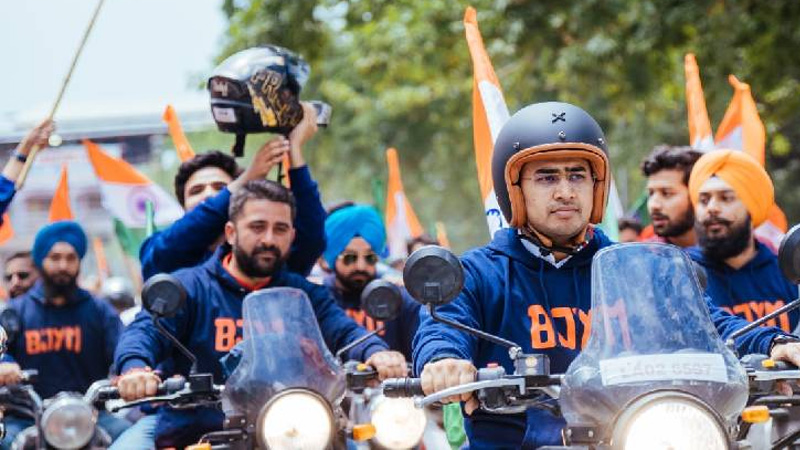 The Bharatiya Janata Yuva Morcha (BJYM) launched a two-day Tiranga Yatra on the Kargil Vijay Diwas starting on July 25, 2022, under the leadership of BJYM National President Shri Tejasvi Surya. BJP National General Secretary Shri Tarun Chug flagged off the Yatra from Lal Chowk, Srinagar attended by 3000 Youths including all National Office Bearers, State Presidents & NEC members. On 26 July, BJYM also organised ‘Prabhat Pheris’ across all districts with Tiranga Yatra. This is for the first time after the Abrogation of 370 such a grand event has been organised in Kashmir.

Flagging off the Yatra, BJP General Secretary Shri Tarun Chug said earlier, no one was allowed to unfurl the National Flag at Lal chowk, and if someone attempted then he faced numerous problems. But a lot of changes are taking place now after the Abrogation of 370 in Jammu & Kashmir. Huge investment is coming to Jammu & Kashmir and progress is clearly visible.

BJYM President Shri Tejasvi Surya said this march from Lal Chowk to Kargil on Vijay Diwas day is a symbol of the unity and integrity of our country. “I salute the great martyrs of Kargil and salute the iron will and determination of Bharat Ratna Shri Atal Bihari Vajpayee ji who made this glorious victory possible. On behalf of lakhs of BJYM karyakartas, I pay homage to Capt. Batra and all the martyrs who sacrificed their lives to protect the honor of the Tiranga.”