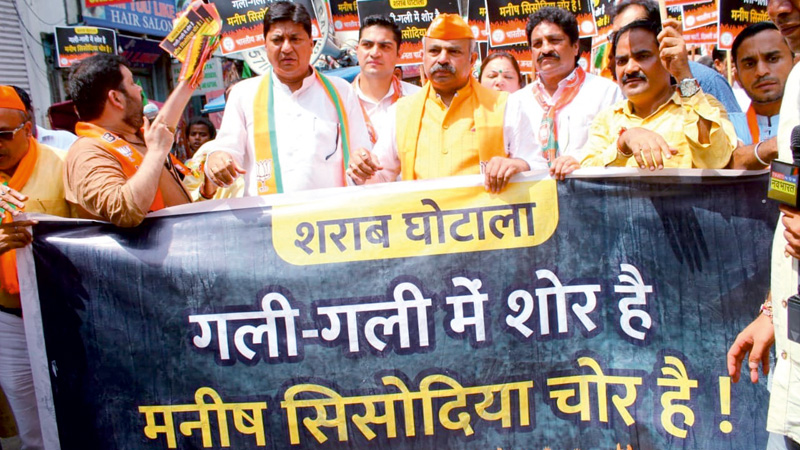 Addressing the protest at RK Ashram, Shri Adesh Gupta said that the AAP has no answer as it also knows that the deceit they have done by making big promises to the people of Delhi has been exposed. Now he has nothing to say and nothing or tell. That’s why now they are misleading people by talking things other than excise policy. He said that the BJP is only questioning that if the excise policy was so good, why did the Kejriwal government take it back? Why was retailing allowed to the manufacturer? Why did they waive off Rs 144 crore of liquor mafia and then again, Rs 30 crore? he asked.

Shri Adesh Gupta asked as to who allowed Kejriwal to loot Delhi’s treasury. They will have to answer for what they have done with the liquor mafia in the scam of crores of rupees by increasing the commission from 2.5 per cent to 12 per cent. He protested by burning an effigy of Manish Sisodia and later said that after all, what was the compulsion of Kejriwal which made him give license to even blacklisted companies. Today, when the BJP is asking this question, instead of answering it, they are talking nonsense and that makes their anger very clear, he asserted.

Union minister of state Smt Meenakshi Lekhi while addressing the demonstration in C R Park, said that the way the Kejriwal government itself had said before implementing the excise policy, that it would lead to Delhi’s revenue going up by crores of rupees but the fact is it has only helped Kejriwal fill up his own pockets rather than help Delhi’s revenue increase. She said that Kejriwal used to say that if there is any corruption, he is a traitor to the country and so in light of this all; he should not remain in office. In such a situation, now what will he say for Satyendra Jain and Manish Sisodia, who have remained in the party and post even after being involved in corruption, she asked.

Leader of Opposition Shri Ramvir Singh Bidhuri demanded the resignation of Sisodia in the protest held at Kasturba Nagar, Kotla today and said that when the truth of AAP has now come out completely today, it is playing a game of accusation and counter-accusation but by doing all this they cannot escape from their sins. AAP government will have to answer why liquor vends were opened in violation of the master plan and rules, he said adding that those who campaigned against corruption are now themselves trapped in it.