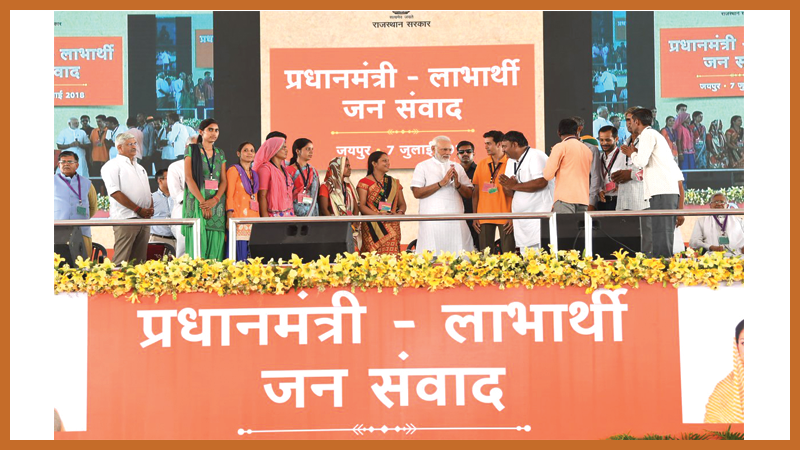 The Prime Minister Shri Narendra Modi addressed a huge public meeting in Jaipur on 07 July, 2018. He unveiled a plaque to mark the laying of foundation stone of 13 Urban Infrastructure projects for the State of Rajasthan.

Addressing the large and enthusiastic gathering, the Prime Minister said he is witnessing first-hand, how Rajasthan welcomes visitors. He said visitors can see the true picture of the progress the State has made in the last few years. He described Rajasthan as a land of courage. Be it living in harmony with nature or defending our nation, Rajasthan has shown the way, he added.

Praising the Chief Minister of Rajasthan, Smt. Vasundhara Raje, Shri Modi said she had changed the work culture in the State. The Union Government and the State Government are working together for the progress of Rajasthan, he said. He said that the happiness of the beneficiaries, who featured in the presentation today, was evident to everyone present at the gathering.

The Prime Minister spoke at length about how the Union Government is working for the welfare of the farmers. He talked about the increase in Minimum Support Price for various crops, announced for the current Kharif season.

Noting that Rajasthan completes 70 years next year, the Prime Minister gave a call to reaffirm the commitment of creating a developed Rajasthan, which will play a pivotal role in the building of a New India.