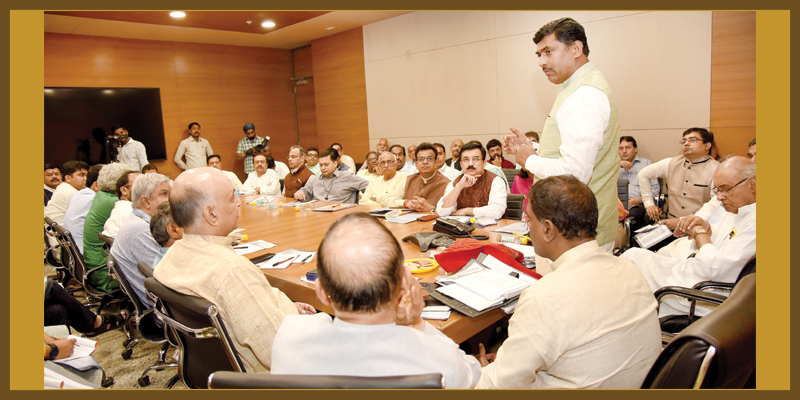 As part of the ongoing Pt. Deendayal Upadhyay Prashikshan Mahabhiyan the BJP on 28 June, 2018 conducted a one-day meeting of the important functionaries of 29 departments and projects constituted by the party National President Shri Amit Shah at it’s headquarters in Delhi. This meeting was presided by the party National General Secretary & in-charge of national training program Shri P. Muralidhar Rao.

Speaking at the meeting, the BJP General Secretary and Training Incharge, Shri P. Muralidhar Rao said, “Congress has betrayed the nation and failed in its responsibility of taking forward the ideals of good politics. The spirit of mission which existed prior to independence no more exists in Congress and it has transformed into a family company. People now look upto BJP to carry the nations ethos, spirit and the mission of reform and BJP can’t fail in it. Our training program is designed so that we not only promote the best people but also groom our party workers to satisfy aspirations of the nation.”

BJP initiated the Prashikshan Mahabhiyan in 2015 and during the 1st phase the party had taken up cadre training at Mandal, District & State level & has already trained over 10 Lakh party workers. In the 2nd phase training of under the “Pt. Deendayal Upadhyay Prashikshan Mahabhiyan” the training of all Morcha’s and spokesperson, etc. has been initiated and initiation of this phase can be said to be the third phase of trainings.

“This is a unique political training project of party cadres which was taken up on the instructions of the party National President Shri Amit Shah who has focused on rebuilding & reorienting the party on firm ideological foundations. This is the first time any political party in India has ever taken up such a massive cadre training program. Under Shri Amit Shah the party had first taken up the Mahasadasyata Abhiyan in which the BJP made a world record of inducting over 11 crores party members. Then as a part of the Mahasampark Abhiyan the BJP contacted all the new entrants in the party to acquaint to them with the party’s core ideology and working methodology,” Shri Mahesh Sharma, convener of the training program informed.