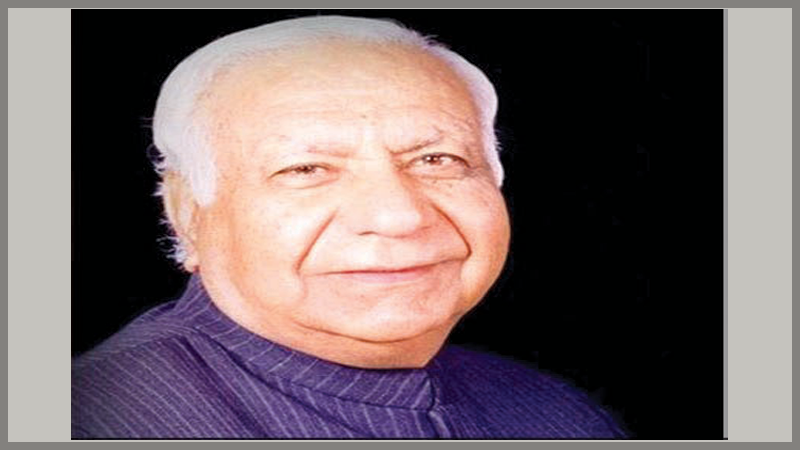 Balram Das Tandon, Governor of Chhattisgarh passed away at the age of 90 on August 14 afternoon due to cardiac arrest. He was admitted to Dr B R Ambedkar Memorial Hospital in Raipur and was put on life support in the morning after his health condition turned critical. Chief minister Shri Raman Singh expressed his profound grief over the death of Governor Balaramaji Das Tandon. He said “He was the father figure to Jan Sangh, BJP and also to all of us. The people of Chhattisgarh will always remember him.” The Chhattisgarh government declared a seven-day state mourning .Shri Tandon was one of the founding members of the Jan Sangh which later became the Bharatiya Janata Party (BJP). He became the governor of Chhattisgarh in July 2014. Born on November 1, 1927, Shri Tandon started his political career as corporator of Amritsar Municipal corporation in 1953.

In his 65 years of political career, Shri Tandon has served in various political postings, including as deputy chief minister of Punjab. The six time MLA Tandon was also jailed from 1975 to 1977 during Emergency. He was recently in news in June when he decided not to accept the raise in salary. The Centre had issued fresh guidelines on allowances to Governors for tours, hospitality, entertainment and furnishings.

It is also to be mentioned that Balram Tandon was among the few leaders who did not accept the rise in his salary as Governor, proposed by the Finance Minister Arun Jaitley in the 2018 Budget.


Saddened by the demise of Shri Balramji Dass Tandon, the Governor of Chhattisgarh. We have lost a widely respected public figure whose service to society will always be remembered. My thoughts are with his family and well-wishers in this hour of grief.

Condolences on the sad demise of Governor of Chhattisgarh, veteran leader and exemplary politician Shri Balram Das Tandon ji. May God render peace to the departed soul and strength to the bereaved family. Om Shanti. #BalramDasTandon

His whole life was dedicated to society : Amit Shah

Saddened to learn about the demise of Chhattisgarh governor Balramji Dass Tandonji. His whole life was dedicated to society. He was multi- talent and efficacious personality. Shri Tandon had been Pracharak of RSS. He also served as deputy Chief Minster in Akali Dal- Bharatiya Jana Sangh coalition in 1969-70. He became two times Cabinet minister in 1977-79 and second time in 1997-2002 under chief minister-ship Shri Prakash Singh Badal. He was also imprisoned during emergency from 1975 to 1977.

Shri Tandonji continuously actively participated in social and public activities. Due to social and welfare work he had been popular among people of Punjab.Balram Das Tandonji who sacrificed his all for the nation and the party,his demise is imparable loss to the BJP. In this time of grief I on behalf of the BJP’s crores of karykartas and myself expressed deepest sympathies to the bereaved family. May God grant the courage and strength to bereaved family and his near and dear to bear the grief.