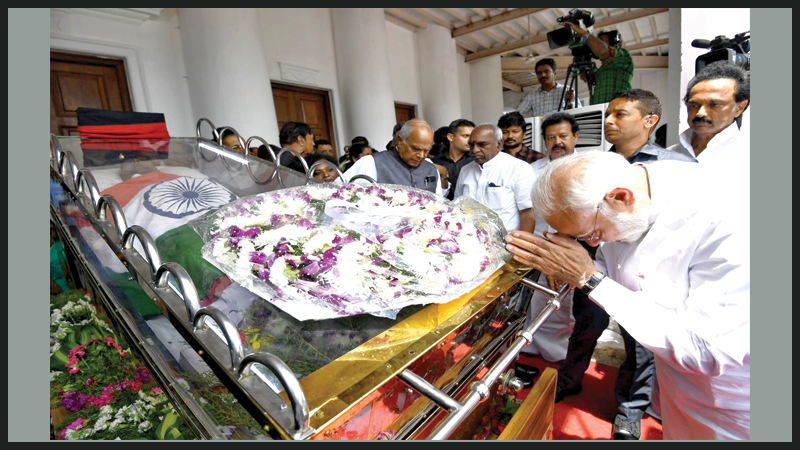 Former Chief Minister of TamilnNadu and DMK President Shri Muthuvel Karunanidhi died at the age of 94 on 07 August, 2018. He was suffering from urinary tract infection for over a week. He had been hospitalised since 27 July. Fondly called Kalaignar, Karunanidhi became 5 time chief minister of Tamilnadu.

Kalaignar Karunanidhi will live on in the hearts and minds of the millions of people: PM

Prime Minister Shri Narendra Modi paid tributes to M. Karunanidhi in Chennai. Shri Modi said that he was extraordinary leader and a veteran administrator whose life was devoted to public welfare and social justice. He added, “Kalaignar Karunanidhi will live on in the hearts and minds of the millions of people whose lives were transformed by him. My thoughts are with the family and the countless supporters of Karunanidhi Ji in this hour of grief. India and particularly Tamil Nadu will miss him immensely. May his soul rest in peace.

He said “I have had the opportunity of interacting with Karunanidhi Ji on several occasions. His understanding of policy and emphasis on social welfare stood out. Firmly committed to democratic ideals, his strong opposition to the Emergency will always be remembered.” He added “Kalaignar Karunanidhi stood for regional aspirations as well as national progress. He was steadfastly committed to the welfare of Tamils and ensured that Tamil Nadu’s voice was effectively heard.”

‘No one can forget his struggle during Emergency’

BJP National President Shri Amit Shah expressed deep condolence on the demise of the leader. He said “Anguished to learn about the demise of veteran politician, M Karunanidhi ji. He had an impressive life journey, starting as a screen writer in Tamil film industry to being five term Chief Minister of Tamil Nadu. No one can forget his struggle during Emergency, imposed in 1975.”

Karunanidhi was a man of committed ideals : Advani

BJP Senior Leader Shri L.K. Advani in his condolence message said, “I am extremely sad to learn about the demise of Sh. M. Karunanidhi In Chennai. He was a doyen of Indian Politics who had started his career after Independence. Mr. Karunanidhi was a man of committed ideals, he excelled in the field of politics & had also made valuable contributions to the Tamil Literature, having written, stories, novels and a multiple volume of memoirs.”

He had the honour of serving the state of Tamil Nadu as Chief Minister on five separate occasions between 1969-2011. He was the prime pillar of Dravida Munnetra liathagarn Political Party.

I offer my heartfelt condolences to all the family members of Shrl M. Karunanidhi & pray to the Almighty to rest his soul in peace.