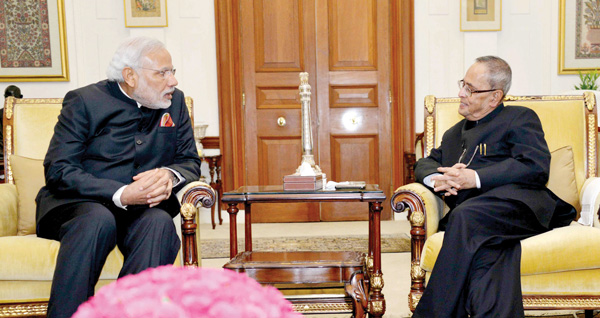 The President Shri Pranab Mukherjee demits office in a few hours. His presidency was the culmination of extraordinary career of a political leader. India has seen a few politicians like him who had the capacity to evolve into a statesman irrespective of their political affiliation and the office that they held. Pranabda is one such leader who brought dignity to every office that he held.

My first contact with him started when he, along with Dr. Manmohan Singh, was occupying the opposition benches during the Vajpayee Government. He chaired important Standing Committees which had the responsibility of clearing several legislations. Three of them were important constitution amendments. One related to the freezing of seats in the Lok Sabha and the State Legislatures despite demographic changes in several States. The second involved review of the Anti-Defection Law. The third one dealt with limiting the size of the Council of Ministers both in the centre and the States. His Committee  expeditiously considered these amendments and improved upon the drafts that the Government had prepared and produced a much better document. He evolved a consensus on all these issues. Even in opposition he was never an obstructionist. He was a product of the parliamentary system and favoured using Parliament for larger National interest.

In his later years, I closely observed him both as a Member and subsequently as a Leader of the Opposition. His natural ability was to rise above partisan arguments. In Parliament, he almost spoke like an amicus curiae – a friend of the House, rather than a party leader. This quality enabled him to evolve a consensus in favour of the argument that he advanced. Very rarely did he lose his cool, but if he did, he was smiling a minute later and making up with his target through some complimentary references.

He had a great sense of history which blended with his vision of constitutional propriety. The democrat in him insisted that the Government and the opposition had to work in tandem on major issues. He could recollect parliamentary and judicial precedents to decide which was the right course that had to be pursued.

As President, he was unquestionably the guardian of the Constitution. He realised that in a democracy there could only be one power centre i.e. elected Government and the Prime Minister. He, therefore, actively associated with two different Governments during his presidency with equal ease. He ensured that all decisions of the Council of Ministers had to conform to constitutional propriety. On some occasions, he wanted to be satisfied before he accorded his approval to those decisions. I was usually sent to interact with him. He was always well prepared on facts, on Constitutional requirements and the need for fairness. These essentials had to be balanced with the requirement of the aid and advice of the Council of Ministers being forwarded to him. This delicate balance he maintained throughout his tenure. He always accepted the advise of the Council of Ministers.

Pranabda exhibited a unique charm which won him many admirers’. He made dealing with him a matter of delight. He put all his interlocutors at ease. He grew in stature with each day. His transformation from a senior Minister to a President was exemplary. As president he was completely non-partisan and conducted himself as an advisor and a guide to his Governments. He owned up the programmes of the Government and became their advocate. He once told me that he had the unique privilege of moving before Parliament the Constitution amendment of Good and Services Tax. He wanted to approve the Constitution amendment during his tenure as the President. It gave him great satisfaction when he did so.

He exits from the Rashtrapati Bhawan with a great stature. He will now assume a greater role of advising and guiding the nation as an amicus curiae which he always was.