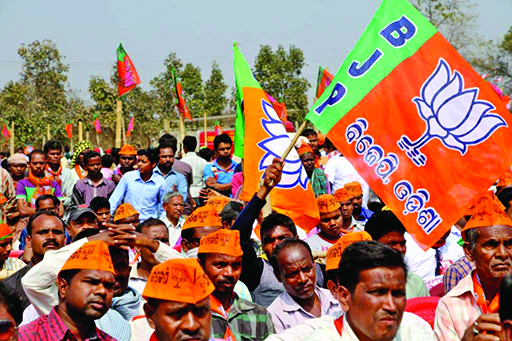 In an unprecedented result, the BJP has performed exceptionally well in the just concluded Panchayat & Zila Parishad elections in Odisha. The Bharatiya Janata Party wrote history with 850% growth after the five-phased elections in the state. BJP’s improved performance comes as a severe jolt to BJD that clean swept the Panchayat Polls last time in 2012. After the conclusion of the final phase, the BJP tally has rose significantly to all time high and shaken the very root of CM Naveen Patnaik’s Biju Janata Dal in the state. The BJP’s surge also pushed Congress to the third position in Odisha. Now, it has become clear that the BJD has lost its supremacy in the state and it is the beginning of the end of BJD rule in Odisha.
In the fifth phase of the Odisha Panchayat elections 2017, the ruling BJD has won 68 Zilla Parishad zones of the 150 zones which went to polls in this phase. The BJP has bagged 56 Zilla Parishad seats, while the Congress managed to capture 12. While the BJD maintained it’s thin lead in all the five phases, but the BJP made heavy inroads in the state.
The BJP has won 306 seats out of the 848 seats which went to polls in the five-phased Panchayat elections. The party has improved it’s tally around a whopping 850 percent as compared to the 2012 elections.

BJP’s performance has been equally impressive in the zila parishads. Of the total 30 zila parishads, BJP has won eight. It did not have any zila parishad in its kitty in the 2012 election. BJD, on the other hand, has been successful in wielding control over 16 ZPs as against the 28 it had so far, losing 12. Congress, which ruled over two ZPs, too lost one. Result of five ZPs is not clear so far.
Noteworthy, the BJD which is ruling Odisha for the fourth consecutive term is now facing tough challenges from the BJP. To beat anti-incumbency, Odisha Chief Minister tried to whip up popular sentiments by raising the Mahanadi water dispute with Chhattisgarh by organizing protests and Jal Satyagraha, but it seems it didn’t pay off for the party.
On the other hand, the BJP not only managed to take its numbers up, but also made inroads in the strongholds of the BJD. Due to the rise of the BJP, the BJD lost ground in over 100 Zilla Parishad constituencies.
Odisha BJP spokesperson Shri Sajjan Sharma said, “We are raring to go. If you were surprised by the success of BJP in panchayat polls, then be ready for more surprises in 2019 polls”.

Congratulating the BJP Karyakartas and voters Prime Minister Shri Narendra Modi said, “I thank the people of Odisha for reposing their faith and unprecedented support to BJP in the local polls and congratulate Odisha BJP Karyakartas for their hard work.”

People reinstated their faith in BJP

Union Tribal Affairs Minister Shri Jual Oram after the comprehensive Panchayat election victory in Odisha said, “The people of Odisha have reinstated their faith in BJP and its leadership. We are thankful to the people for exercising their franchise and making a remarkable decision by giving a huge victory to the BJP.”

it’s beginning of the end of BJD rule

Union Petroleum and Natural Gas Minister Shri Dharmendra Pradhan expressed his gratitude to the people of Odisha for their unprecedented support to the BJP which is closely following the ruling BJD in the ongoing three-tier Panchayat polls.
He said the current trend is clearly reflecting people’s antipathy for BJD which is gradually losing ground and the state started accepting BJP as their alternative choice despite the BJD flexing its muscle and money power. He said the voters have shown a mirror to the BJD and it’s the beginning of the end of BJD rule in Odisha.

BJP National General Secretary and In-Charge of Odisha Shri Arun Singh said the final tally of BJP is around nine times of the seats it had won in 2012. Shri Narendra Modi’s popularity, effective implementation of Central Government schemes in the state and failure of Naveen Pattnaik government in the last 17 years of its rule are the major factors behind BJP’s unprecedented performance, he said.