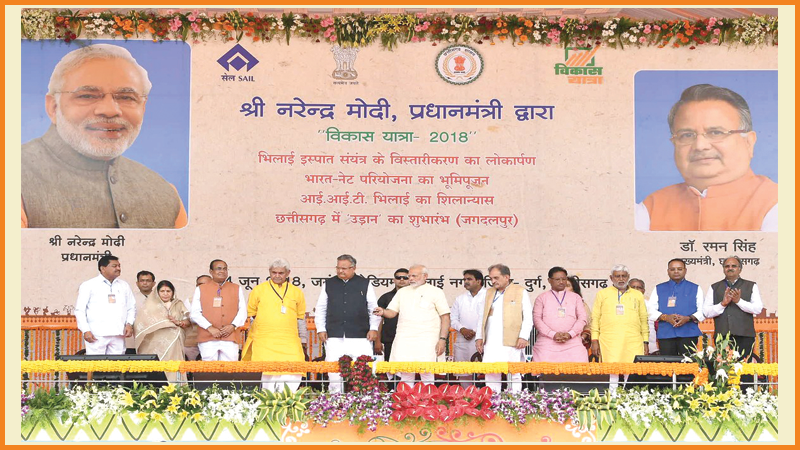 Prime Minister Shri Narendra Modi visited Chhattisgarh on 14 June, 2018 to dedicate the modernized and expanded Bhilai Steel Plant to the nation. On the occasion, the PM also addressed a huge public meeting.

During the same event, Shri Modi also distributed laptops, certificates and cheques to beneficiaries under various schemes. He laid the foundation stone for the permanent campus of IIT Bhilai. He unveiled a plaque to mark the commencement of phase-2 of BharatNet. The BharatNet project envisages connecting Gram Panchayats with the underground opticalfibre network.
Earlier, before arriving in Bhilai, the Prime Minister visited Naya Raipur Smart City, where he inaugurated the Integrated Command and Control Centre for the city.

Speaking to the gathering he said, ‘Earlier where there were no roads, now airports are being constructed along with roads. Naya Raipur has become the country’s first Greenfield smart city. Water, electricity, street lights, sewage, transport and security of the city all will be managed from this centre. This will be an example for smart cities across the country’’.
The Prime Minister asserted that development is the best answer to all kinds of violence.

He said that in the last two months, the Gram Swaraj Abhiyan has had a very positive effect. He said that this Abhiyan is being pursued vigorously in the 115 Aspirational Districts, out of which 12 districts are in Chhattisgarh. He spoke of the benefit that schemes such as Jan Dhan Yojana, Mudra Yojana, Ujjwala Yojana, Fasal Bima Yojana and Saubhagya have brought about in the State.

Shri Narendra Modi said that keeping in mind the interests of the tribal population; the Forest Rights Act is being strictly implemented. He said the Government is working for the welfare of tribals, and Eklavya Vidyalayas are being established across the country.

The expansion of Bhilai Steel Plant will further strengthen the foundation of a New India.

Continuous efforts are being made to enhance water, land and air connectivity.

Under UDAN Yojana, we are opening new airports at places where the previous government even refrained to construct roads.
Naya Raipur is now the country’s first Greenfield Smart City; be it electricity, water or transport, everything will be controlled from a single command centre.

Development is necessary to eliminate any kind of violence, said the PM.