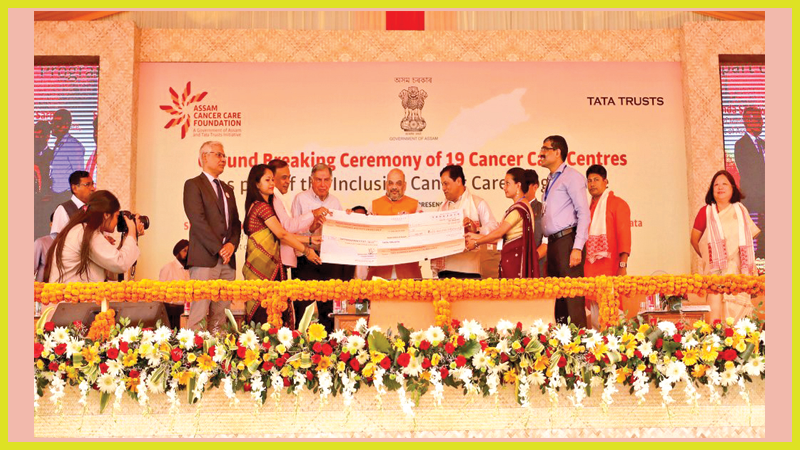 BJP National President Shri Amit Shah said that prolong Congress rule in Northeast India has resulted in under development of the region, and under Prime Minister Shri Narendra Modi most of the North eastern states will regain its lost place and emerge as the highest contributor to the GDP of the country.

Shri Shah, who was speaking at the “Ground Breaking Ceremony of 19 New Cancer Centres” in Guwahati, on June 18, 2018 said, “Assam is developing fast and two years of BJP rule under Chief Minister Shri Sarbananda Sonowal has surpassed what congress did in last 15 years in Assam.”

Around 19 cancer hospitals will be built in various stages. The project is promoted by Assam Cancer Care Foundation, a joint initiative of the state government and Tata Trusts.

While Tata Trusts have provided Rs 900 crore, the state government will pump in Rs 1030 crore and Centre will provide Rs 180 crore for the project.

Shri Amit Shah said setting up such large number of cancer hospitals has never happened before and after Independence. “Northeast India for most of the time was under Congress rule, the region was one of the highest contributors to GDP prior to independence however development took back seat during successive Congress regimes and region slipped in the GDP. With the coming of BJP the trend is getting reversed and development is once again taking places across the region,” the BJP President added.

During the visit the BJP President also reviewed the organizational activities of the party in Assam and met with ministers, MPs, MLAs and BJP State President Shri Ranjeet Kumar Das discussing the strategy for Lok Sabha polls. He has set the target of wining 21 out of 25 parliamentary seats in eight Northeast states.

Addressing on the occasion Assam Chief Minister Shri Sarbananda Sonowal said,” We have inherited a corrupt system however series of reforms has started bearing positive results. Following Advantage Assam; Global Investors’ Summit, the state has come into limelight of the nation and a total of Rs 79,000 crore of investment has been committed.

Assam Minister for PWD, Health and Finance Shri Himanta Biswa Sarma said that the 19 hospitals will be completed in 24 months, and will cater to cancer patients free of costs under the Atal Amrit Abhiyan and other health schemes.

Chairman of Tata Trusts Shri Ratan Tata said that since the north-eastern part of the country has highest occurrence of cancer cases, Tata Trusts committed to the cause of setting up cancer hospital grid in the state. Researchers under the Trusts are working for finding cutting edge solutions to manage cancer efficiently so that mortality due to cancer can be reduced through awareness, prevention and early detection while taking care closer to the people, he said.

Arunachal Pradesh Chief Minister, Shri Pema Khandu said that these cancer centers would immensely benefit the patients from Arunachal and other parts of Northeast. During his meeting with the Tata, Khandu requested Tata Trust to put up similar projects in Arunachal which is recording very high rate of cancer cases.

“Our patients go all the way to Mumbai in Tata Memorial Hospitals and Cancer Research Institute to get treatment for their ailments incurring huge expenditures. If such centers come up in Arunachal, it will be of much respite to the people” Shri Khandu said while justifying his request. Ratan Naval Tata in principally agreed to set up two specialty cancer centres in Arunachal. He also agreed to visit Arunachal soon to finalize the project.